Bitten by the math bug!

We have been hit by the math bug! Here are a series of math activities I have been working on with Doll. 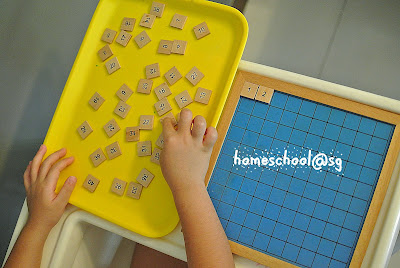 The hundred board was getting dusty! I took it as a call to bring it out and have Doll work her numbers from 1-40 (just to refresh her memory). 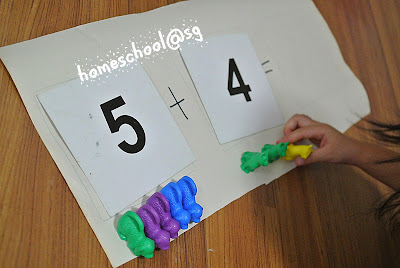 Just like when Sonshine was a toddler, I accidentally found out Doll could do simple addition and subtraction. One day, she told me that after she drank one bottle of Yakult, there would be xx remain. Curious, I asked her if she had say, 8 bottles of Yakult and mummy drinks 1, how many would there be left? She yelped out '7'! I threw her more questions like these that require her to either add or substract by ones and twos. I soon realised she is getting the concept.
Wanting to seize this sensitive period of hers, I hastily drew up the above activity. She had to draw two cards and add them up with the help of animal counters. 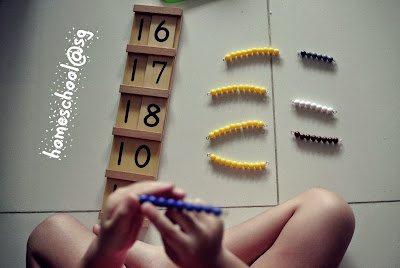 Also, I thought it was high time that she tried her hands on the teen board. It is not my intention to teach her place value at this point, but I wanted her to see the pattern. What better way than to use Montessori materials!
I showed her that each of the yellow string of beads has ten beads. And if we add say one bead, the total becomes 11 and on and on. By the time I hit 13, she wanted to do it herself and I let her.
Much to my surprise, she grasp the concept almost instantly. Later even without the teen board, she could tell me that 10 + 6 = 16 or 10 + 9 = 19. She even figured out that 10 + 10 = 20!
I love montessori! 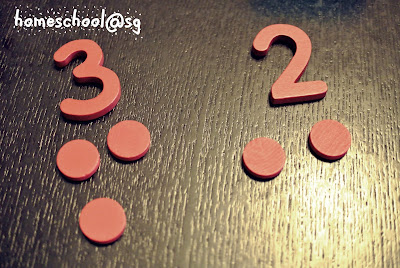 Over lunch, I would try to do a quick activity or two. Some time this week, I took out the number counters and we fiddled with it. I showed her that the number '2' has a partner (see the round counters) whereas '3' has no partners. She got curious and took out the other times in search of which numbers have partners or which do not have. We sorted out which numbers have partner and which do not.
If you have not figured out by now, I am taking a step forward to teach her about odd and even numbers. I still think she is not ready so I introduced to her the terms 'partners' first. Hopefully, it will help her understand the terms odd and even better later. 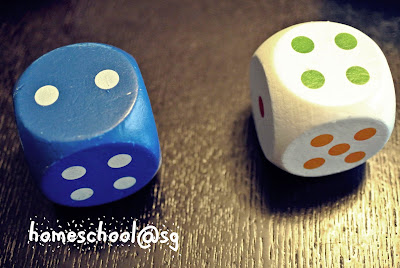 I got these huge dice and played with her over lunch. Sometimes we would count and add the numbers. The other day, we each took a dice and we rolled to see who gets the bigger number. I introduced the terms 'more' and 'less' while playing. I simply asked 'who has more?' or 'who has less?'.
Ah, I feel so at ease with math. I just love math home learning with my kids!