One of the things I learnt is that school grades isn't an indication of how intelligent a child is. It also depends on how conscientious the child is, whether he's the careful or careless sort, is he too complacent, does he have performance anxiety etc. If an intelligent child is lazy, unmotivated & complacent, he may still do well but probably not as well as those who may not be as intelligent but are a lot more diligent. This is what is I'm witnessing. Sonshine is clearly ahead of his peers (I say this factually) but he's careless & tends to rush through his work so he always makes one mistake that cost him the full marks. While other kids who struggles to learn at home, ultimately gets ahead of him because they are more conscientious & careful with their work.

I also discovered a bit of myself & Sonshine this year. I realised I'm morphing into a true blue tiger mom. That tiger mom silently crept into me & slowly but deceptively took over me with each passing term. It has become quite bad & it's taking a toll on Sonshine. I'm quite glad that it's nearing the end of the year. I can take a break to rethink & reflect what I want & expect from Sonshine. Do I want to be a mom who bring out the best in him AT ALL COST or do I slide back and let the winds take him? This is indeed a very difficult journey.

The other thing I noticed is Sonshine's strange habit. When I tell this to other moms they think I'm being ridiculous or maybe they think I'm just being sore that Sonshine is not getting the full marks & hence making up excuses for him. But I can't help but notice for most of his tests, he makes ONE mistake. Not two, not three but one mistake. The odd thing is, those mistakes aren't something he doesn't know nor is it very difficult. On the contrary, harder questions he gets it right but the easy ones, he gives illogical answers. Term after term, he loses a mark for most papers. It almost feels like he sabotage himself.

Before you jeer at me, let me take you back when he was a toddler. Even at that young age, he gives the people impression that he doesn't know he's stuff. I remember a teacher asked him questions that he knows very very well but he always give the impression to the teacher that he doesn't know either by giving a blank look or simply ignoring. Those times, if I step him and demanded him to answer the teacher, he would immediately sprout out the answers without a glitch. This continued in his preschool years. He seemed to fly under the radar as best as he can. Again when teachers or friends ask him something that he knows very (and I really mean very) well, he'd instinctively answer 'I don't know'. Then, I would brush it off and tell myself he's a kid and he will come out his shell when he's older. Now at primary school, he seems to be doing it again. This time on his school papers. Term after term, I look at his papers & I get baffled at how he CONSISTENTLY makes one, only one mistake on his papers.

I can't say he's consciously doing this. But it does seems like it's a habit he has since he was a mere child. Moreover, even as a young child, he hates being at the center of attention & will do everything to avoid attention. Once He cried, no I mean bawled, when he won a race & everyone cheered for him. That's also why he refused for us to throw any birthday party for him. This year on his birthday, I lied to him that all the people at an indoor playground were there to celebrate his birthday! He freaked out, kept saying 'I don't want I don't want' and didn't want to enter into the premise. Until I told him I was teasing him, he relaxed and entered into the premise with ease.

So I don't know. If one just look at this year, one can easily say I'm just being a sore parent. But if you look at his past 7 years collectively, there's an apparent pattern & one can't help but wonder what's going on? And is it possible for someone who self sabotage like that? It may appear that I am after that full marks but more than that, I worry that he's passing out on all the opportunities. As a parent it is extremely frustrating to see children with lesser ability surpassing him while he's being sidelined.

As one can see this is quite an emotionally charged year for us. Lots of bewilderment and lots of questions to investigate. To make it more 'colorful' we have one of the worse teacher I ever known. :( I really do need to take a step back and consider what happened this year and how should we move forward. But hey, parenting is a learning journey right?
Posted by homeschoolsg at 12:35 No comments:

I love Montessori Pink box activity! But I always find collecting the small objects & finding a place to store them a HUGE hassle. It is also not easy to find the objects individually as most of the time, you are required to buy them in a set amongst other things. It just makes no sense especially when I find no use for the other items in the set. Finding a (large) box is one thing and storing that box is another!
I know there are mothers who set up the box and sell them in a set. Still, I find it too costly to purchase particularly if its something that I can easily duplicate myself.
So, I put off this activity for a long time. Until, I had a light bulb moment! And here, I present to you...my own version, a very tweaked version of Montessori Pink Objects. 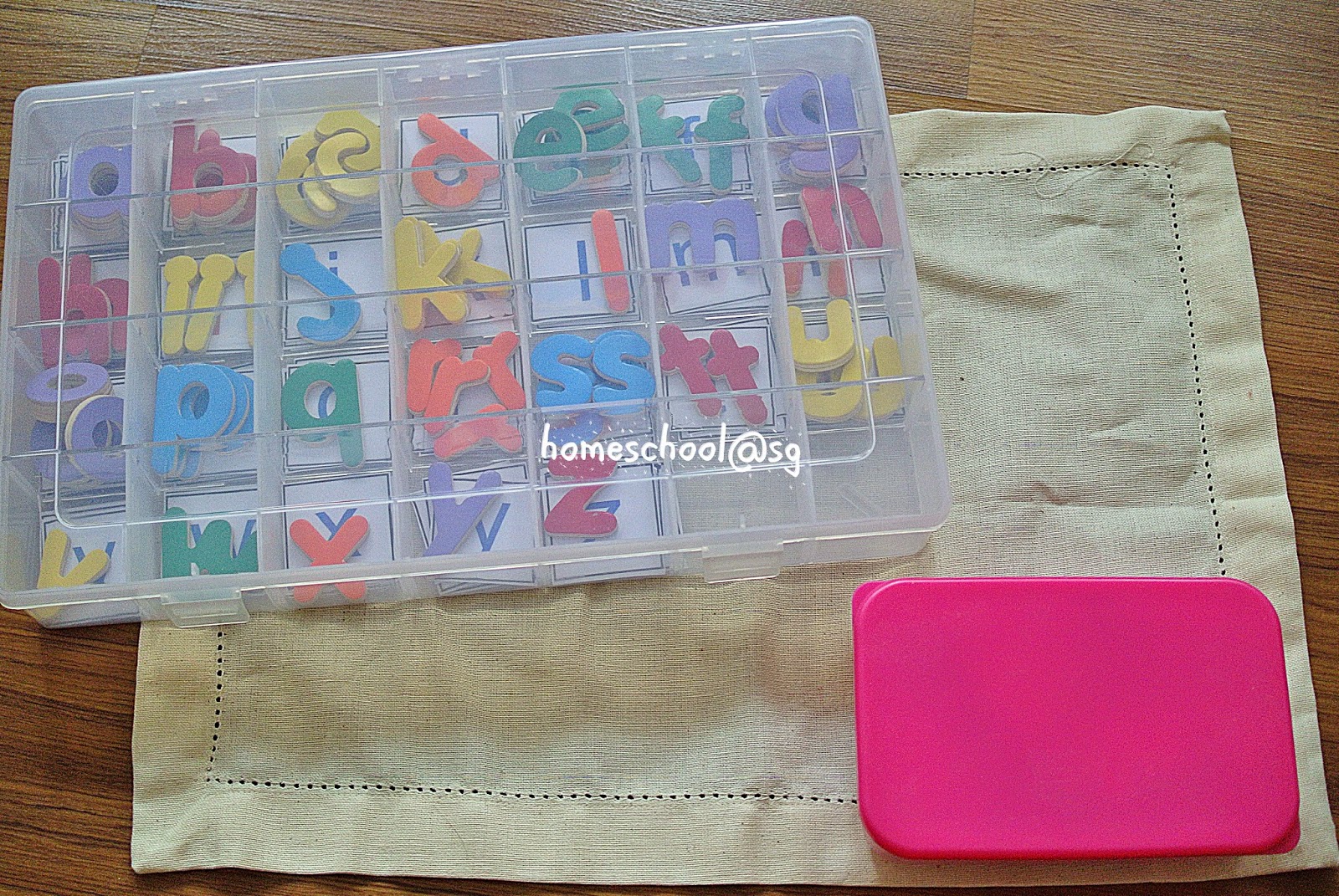 Here's my set up. I have longed set up my own movable alphabet box using the cut out letters from our Melissa and Doug set. 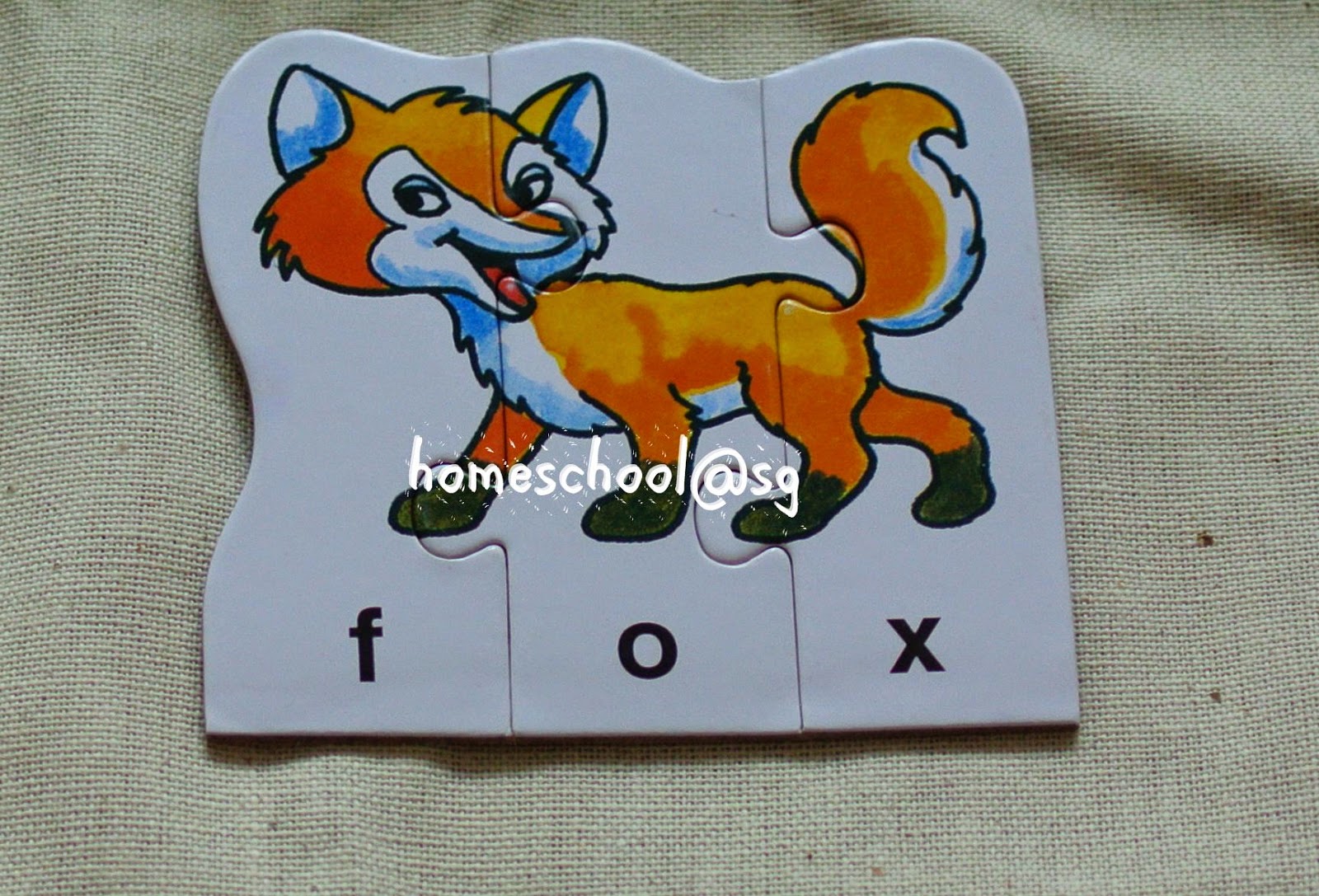 Instead of the small objects, I placed the above puzzles (within the same word family) in the pink box. First, to set the play, Doll build these puzzles. 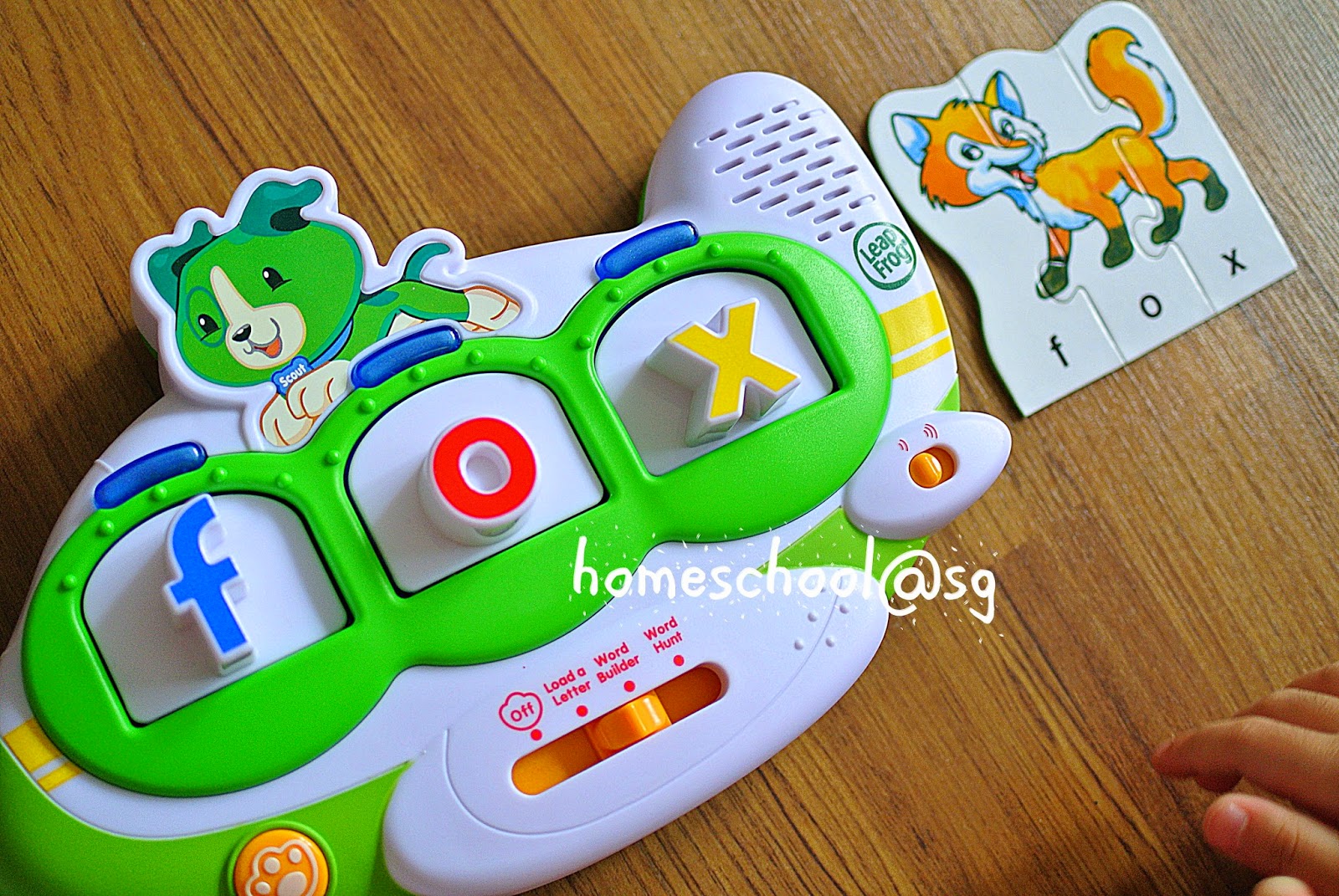 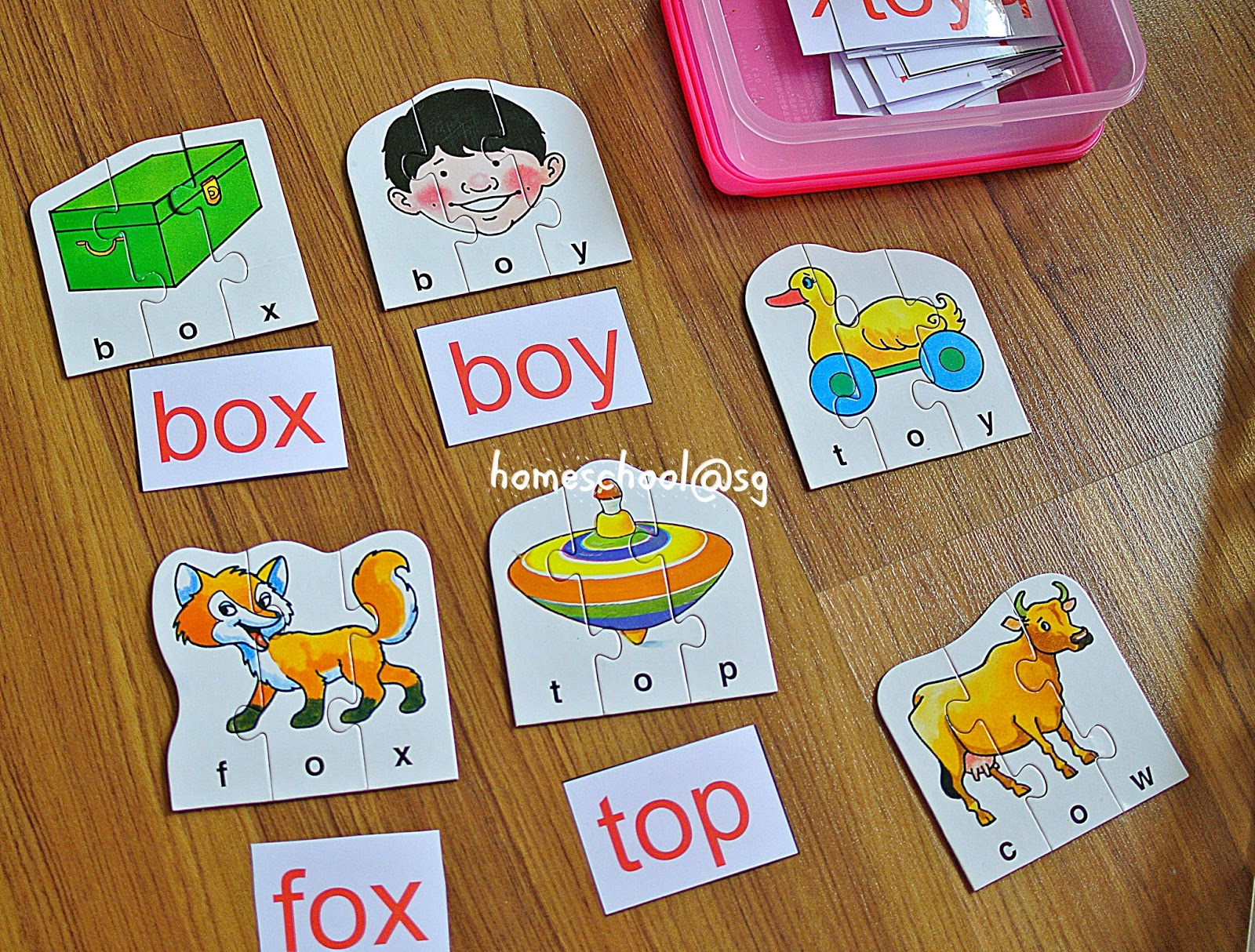 After she figured out each word, I gave her my word labels and have her match to the puzzles. I am pleasantly surprised that she immediately recognise these words. Looks like it's working! 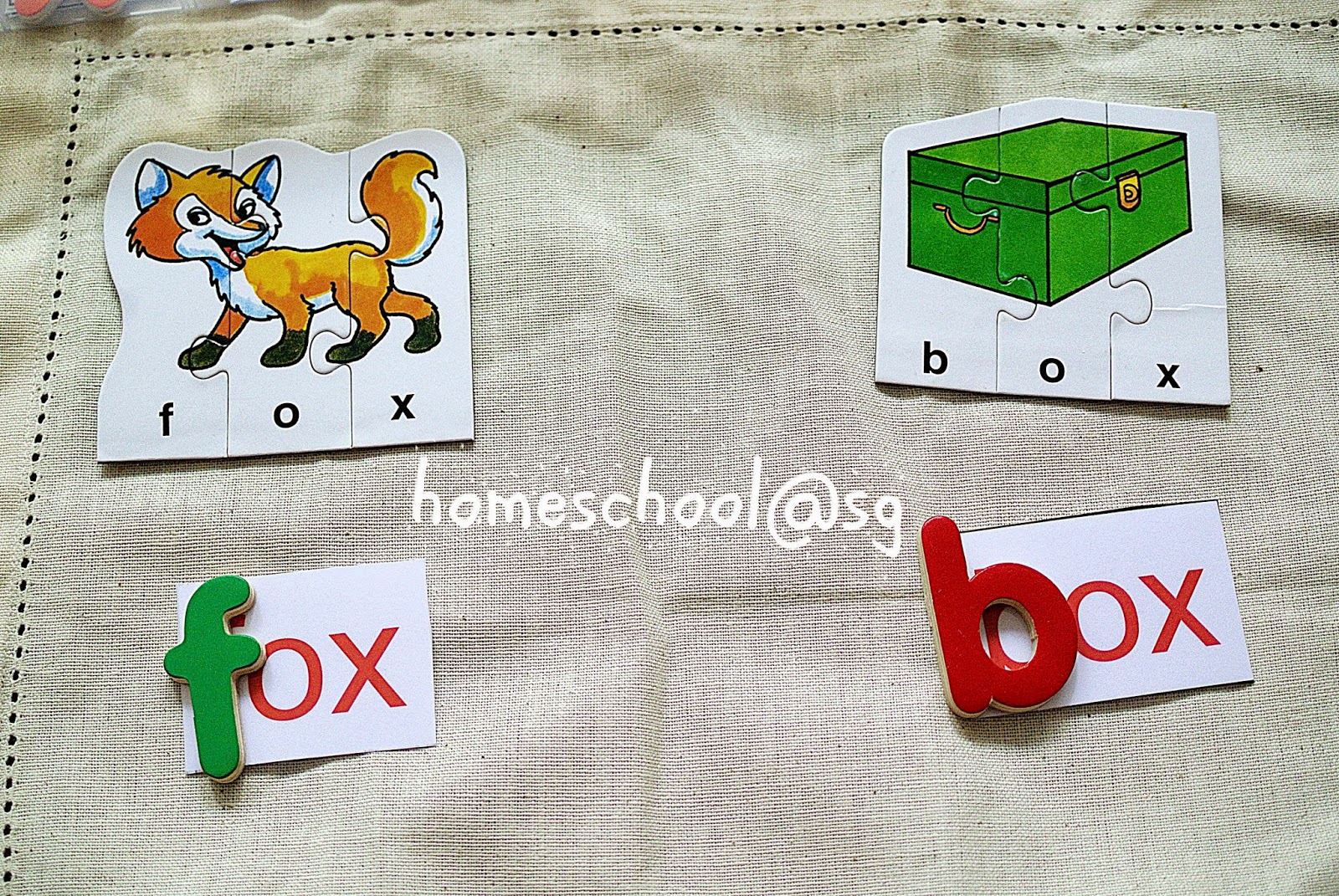 This is something I intend to do with her later. Here, I want to help her differentiate similar sounding words like 'fox' and 'box'. She will use the cut out letters and identify the beginning sounds of each word. 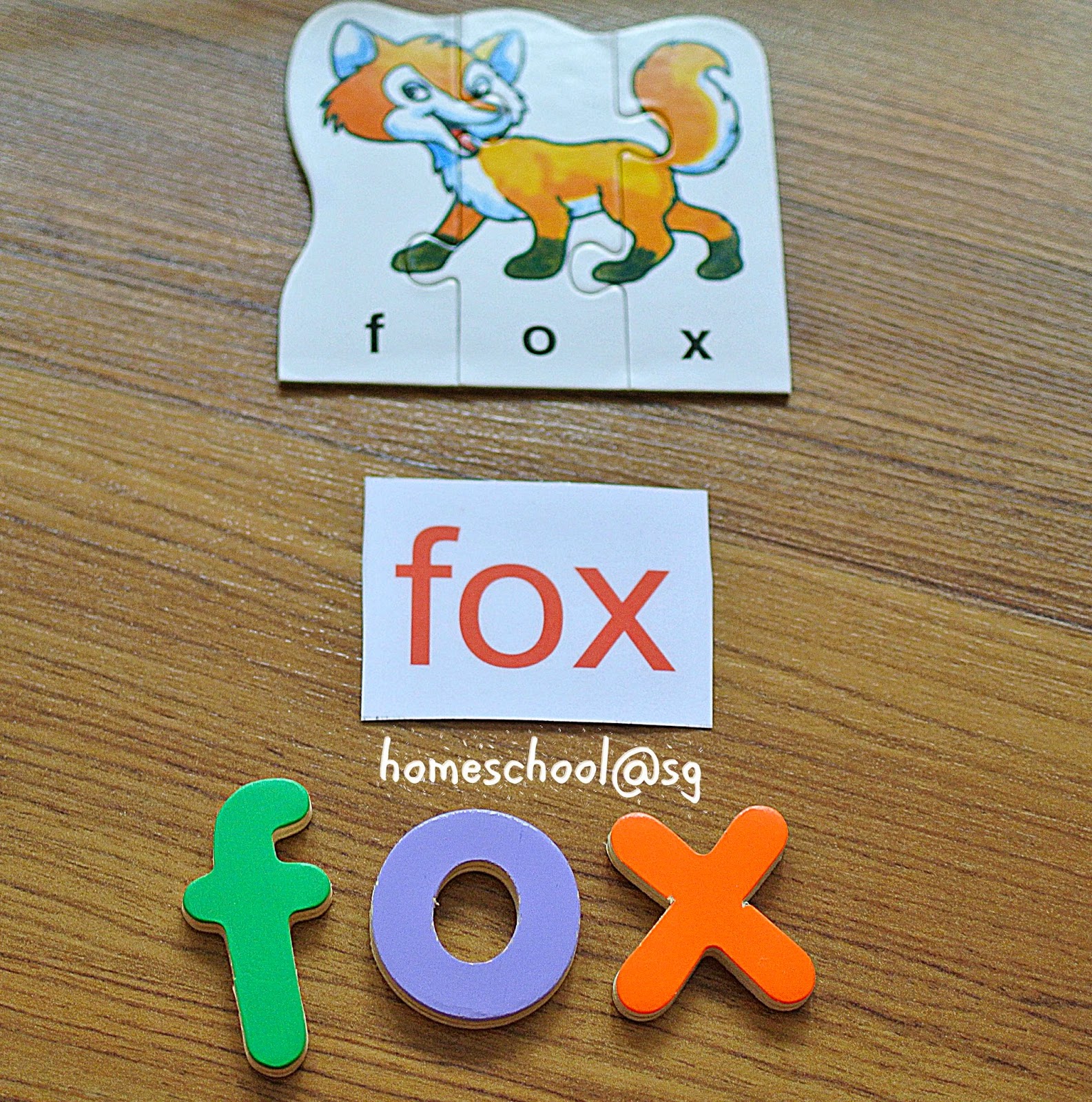 Lastly, again using the Melissa & Doug cut out letters, I will have her spell each word. I hope that by this way, it will also help her see the difference between similar words like 'box'.
This will probably be my focus for the next few weeks. I find that Doll is in the sensitive period now in picking up new words and I plan to size this opportunity!