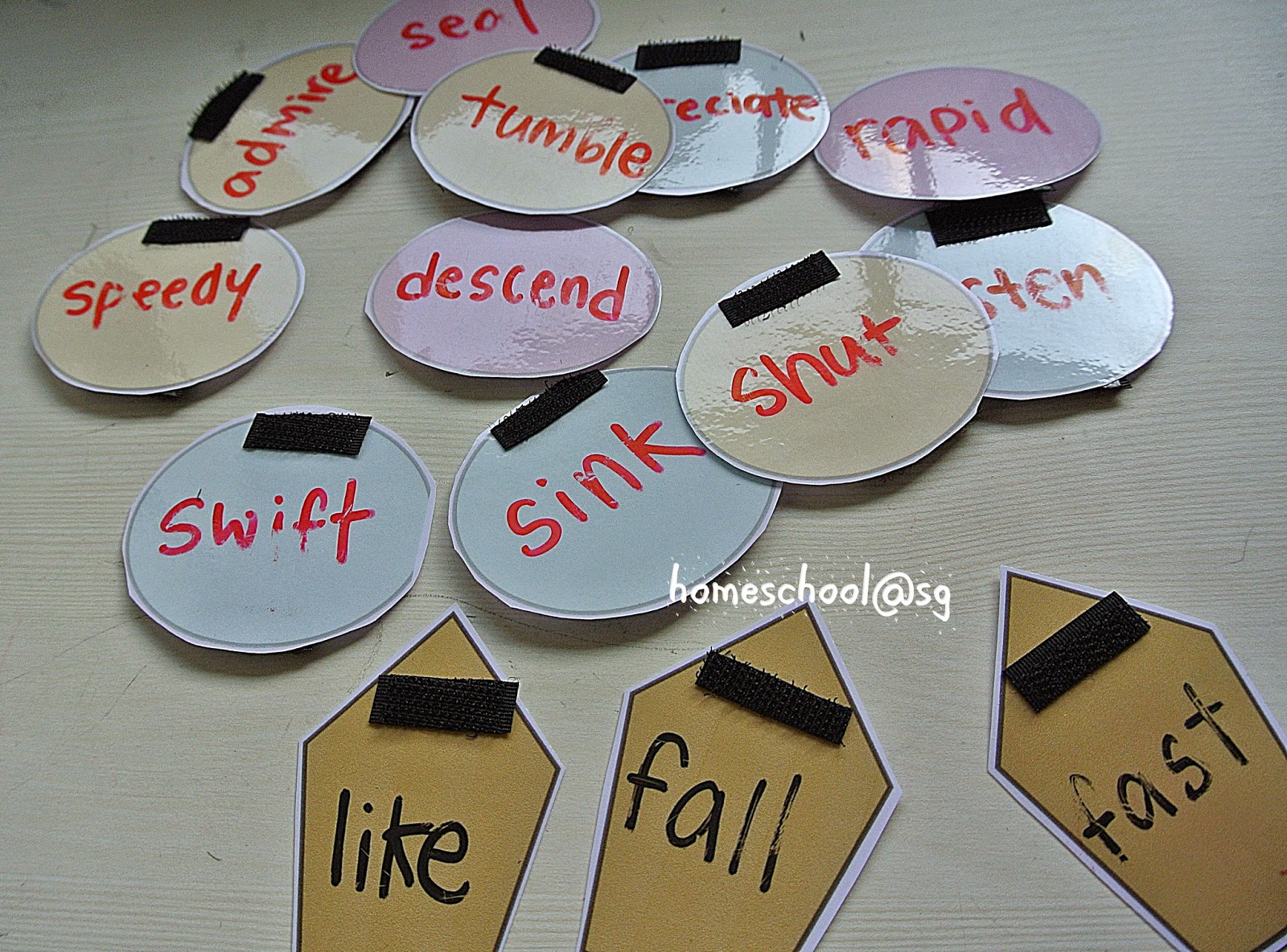 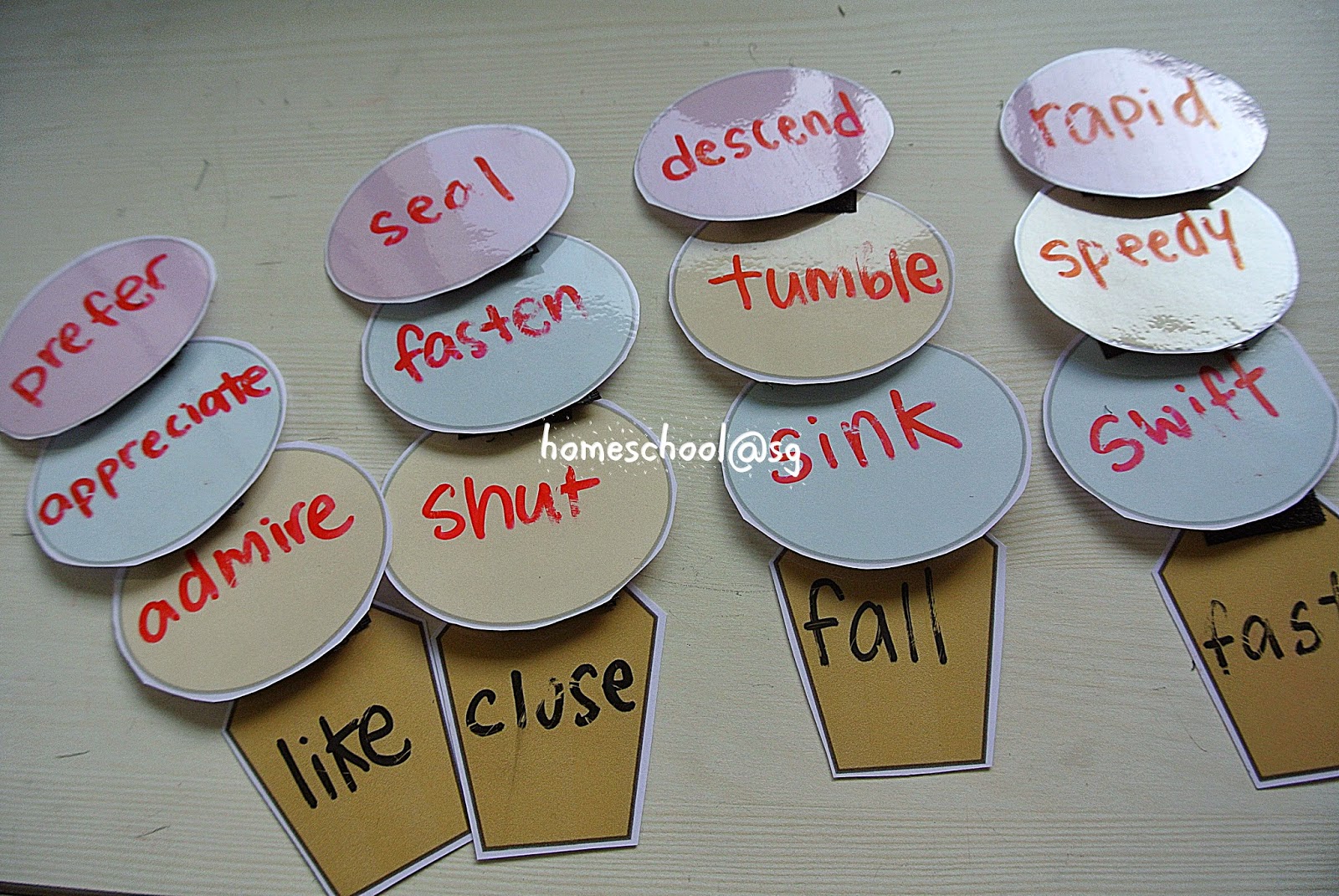 Beading for her mama

It all started when I bought this cheap DIY necklace box from Daiso for $2! 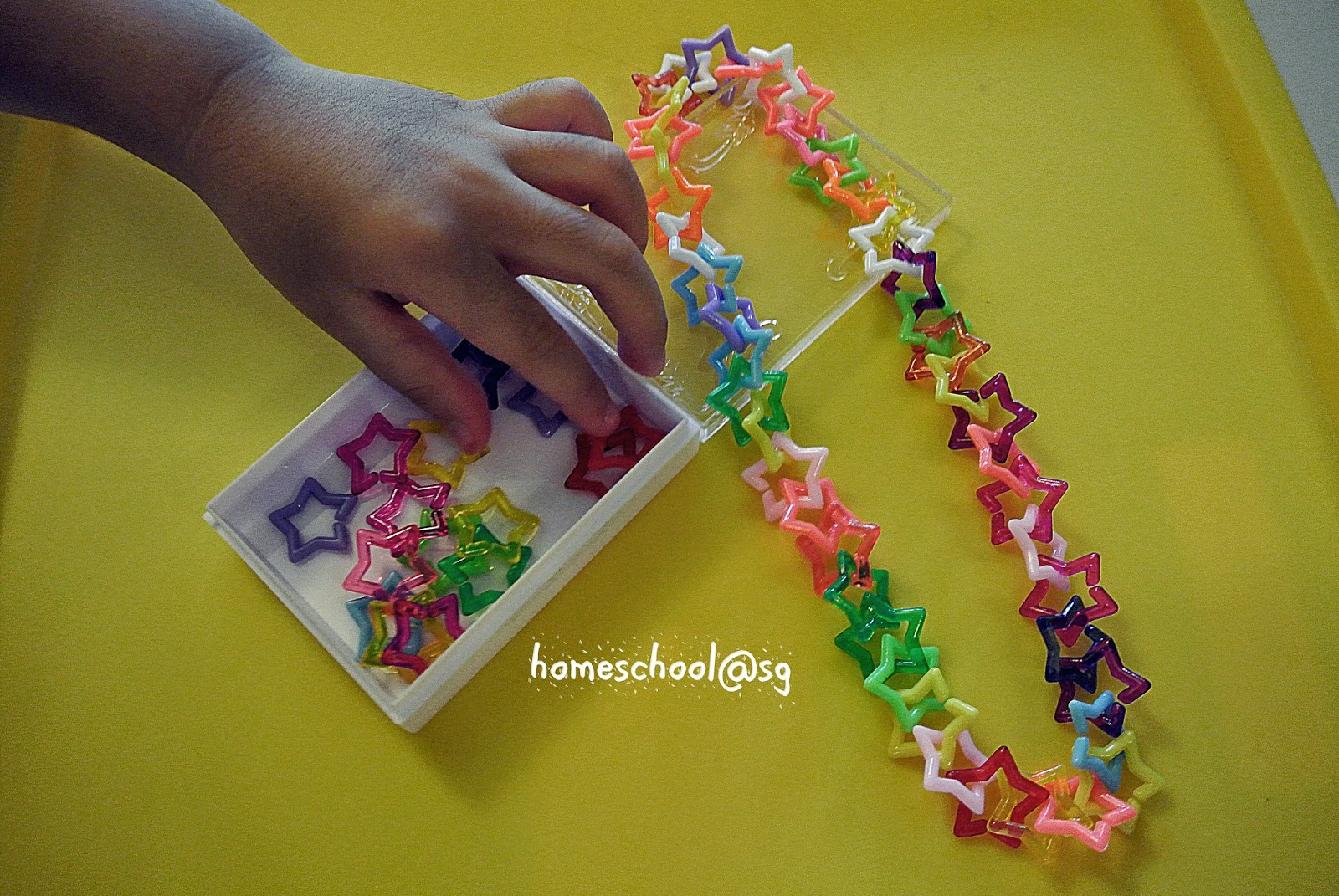 I saw that this was a good opportunity for Doll to work on her pincer grasp. However, she couldn't connect the stars together at first. It works like a paper clip; to connect one only needs to join each star through the small disconnected loops on each star. IF you can understand all that...anyway!
I did a necklace for her nevertheless & she fell straight in love with it. She wore the necklace for the entire day. But I wasn't comfortable with it because the stars have rather pricky edges. So I bought her a gorgeous beaded necklace & of course she ADORES it (I have a girly girl here)!
I pretended to sob and grumble that I don't have any necklace & no one got me one. She immediately comforted me and assured me that she would make one for me! AWWWWW 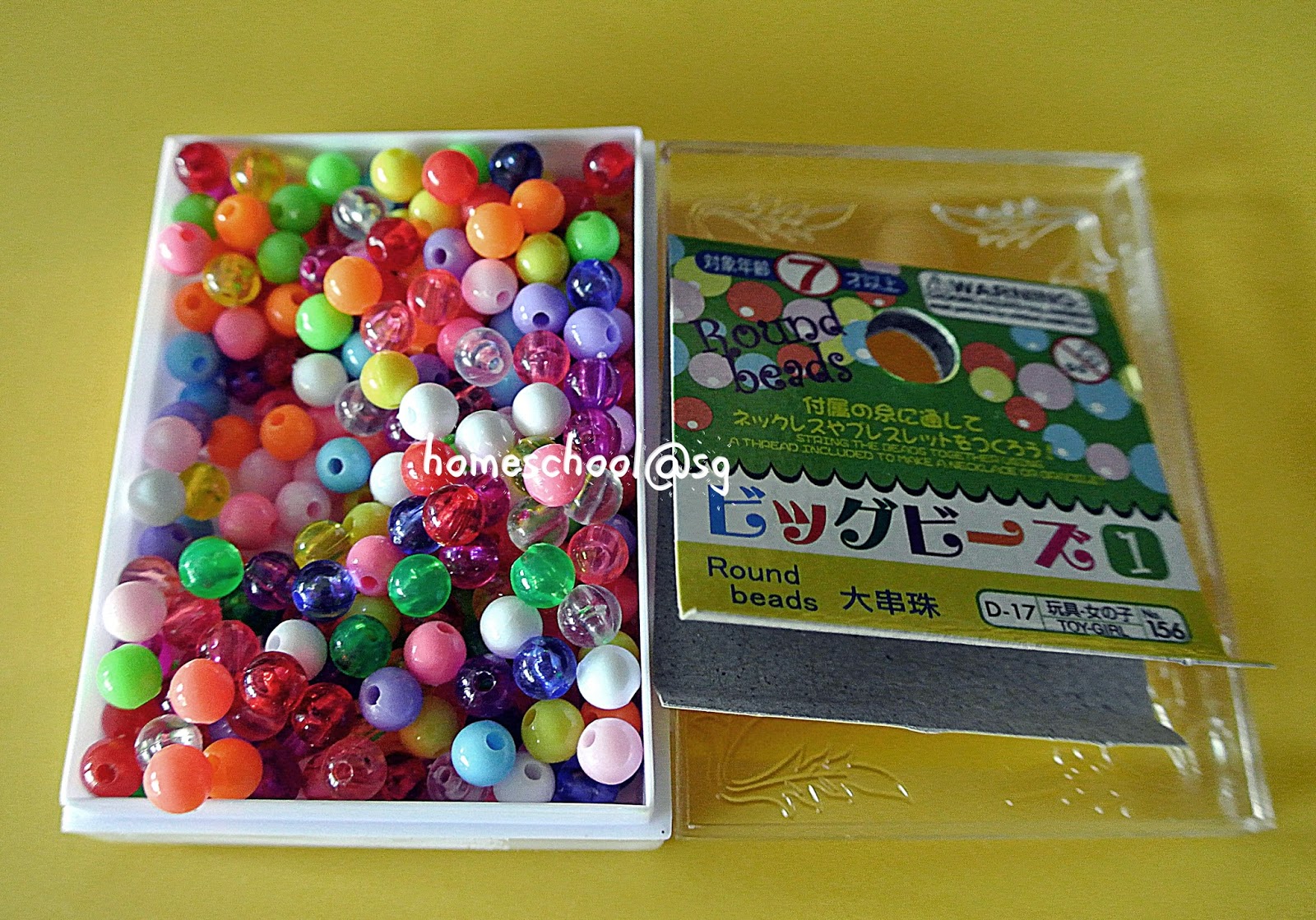 Doll knew I bought another beading jewellery from Daiso and bug me day after day to let her do it. (She REALLY wanted to use this to make a necklace for me) AWWWW
I finally let her do it and oh boy, did she work it!
As I watched her string bead after bead, I saw how a simple (and cheap) activity unknowingly taught her (and me) many lessons. 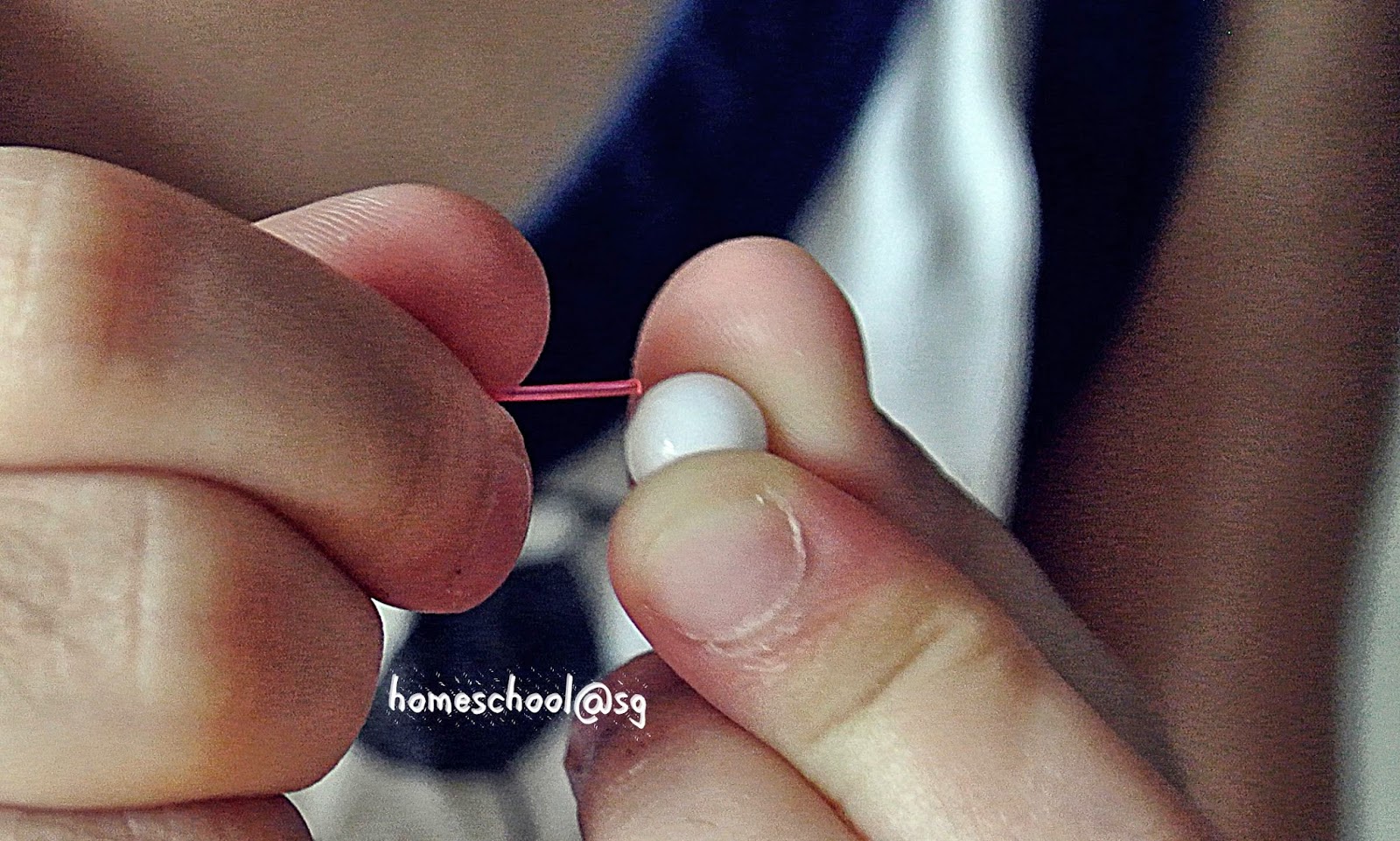 Obviously, she learnt how to use her pincer grasp. As she strung each bead, she became more and more efficient and skillful. Also, I let her decide which is her master hand ie which hand to hold the string and which the bead. From here, I could tell she will be a right hander.
The other thing that left me in awe was how patient and persevering she was. She set herself to finish the beads and didn't want to stop until I had to interrupt it as we had to pick Sonshine up. I love her working attitude- I hope it will translate into her school work next time! :P

Later, she tried her hands on the stars again and to my delight, she did it! She made herself a full bracelet with the remaining stars. I am so proud of this girl! 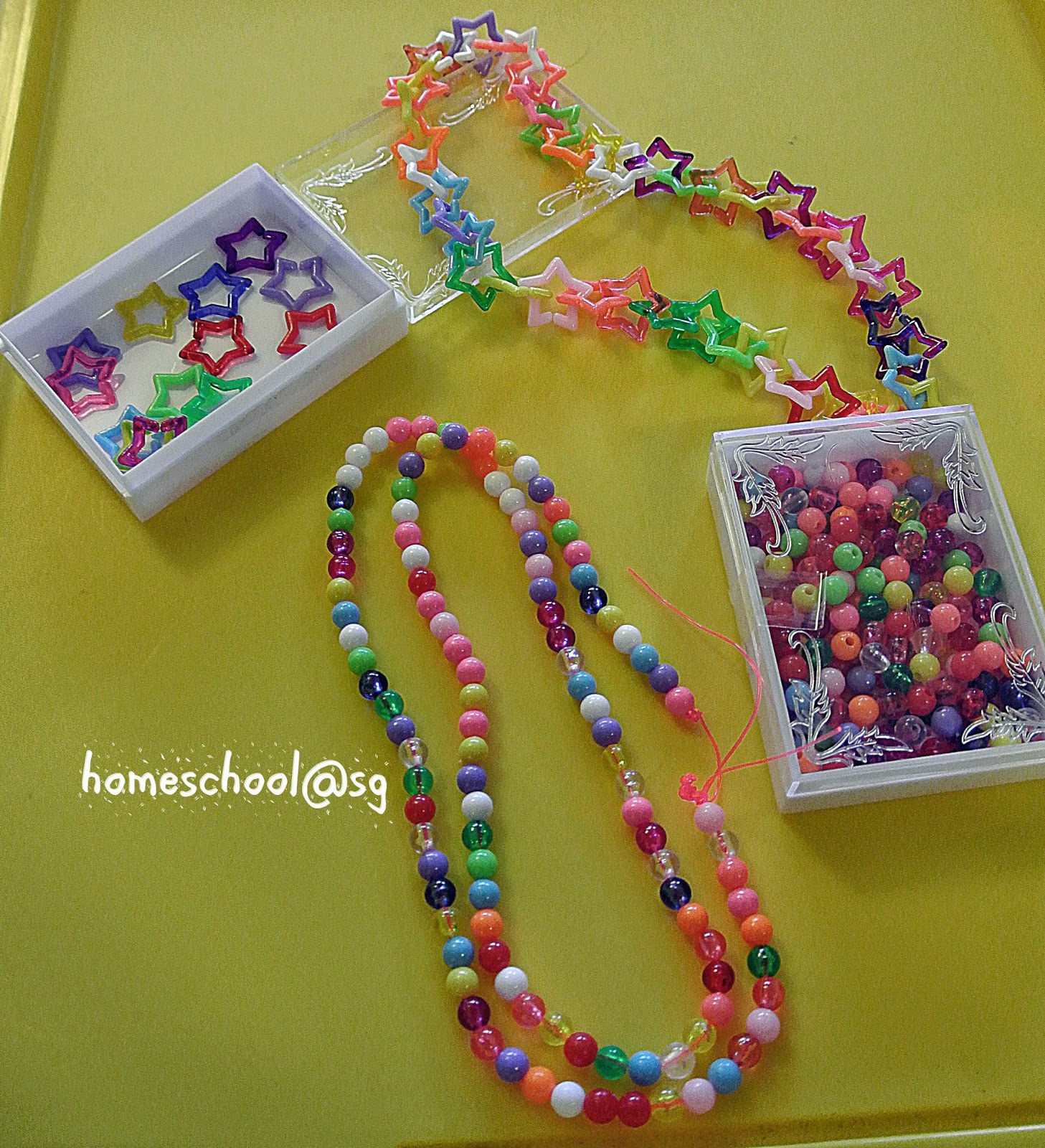 Our final masterpieces! The bead necklace was mostly done by Doll and she actually presented it to me! How sweet!
This beading activity is absolutely cheap and satisfies the 3 Ps:
1) PLAY
2) (hones) PATIENCE
3) & PERSEVERANCE
LOVE IT!

Posted by homeschoolsg at 11:58 No comments:

I am planning to start Doll on writing which explains why I am focusing more on Practical life activities as well as working on her pincer grasp.
Plus, practical life activities are the easiest to prepare! Yesterday Doll made her own orange juice.
It started one day we chanced upon an orange juice maker vending machine! My hub was so y fascinated by the novelty that he splurge $4.50 on it without battling an eyelid.
It was intriguing watching how the machine selected the oranges, sliced them, squeezed them, collected the juice into a cup and served the fresh drink to us. Doll slurp up every last bit of the juice, she said it was "very very very nice"!
So grabbing the chance when that experience is fresh in her mind, I made Doll squeeze her own and at the same time exercise her hand muscles (for writing in future). 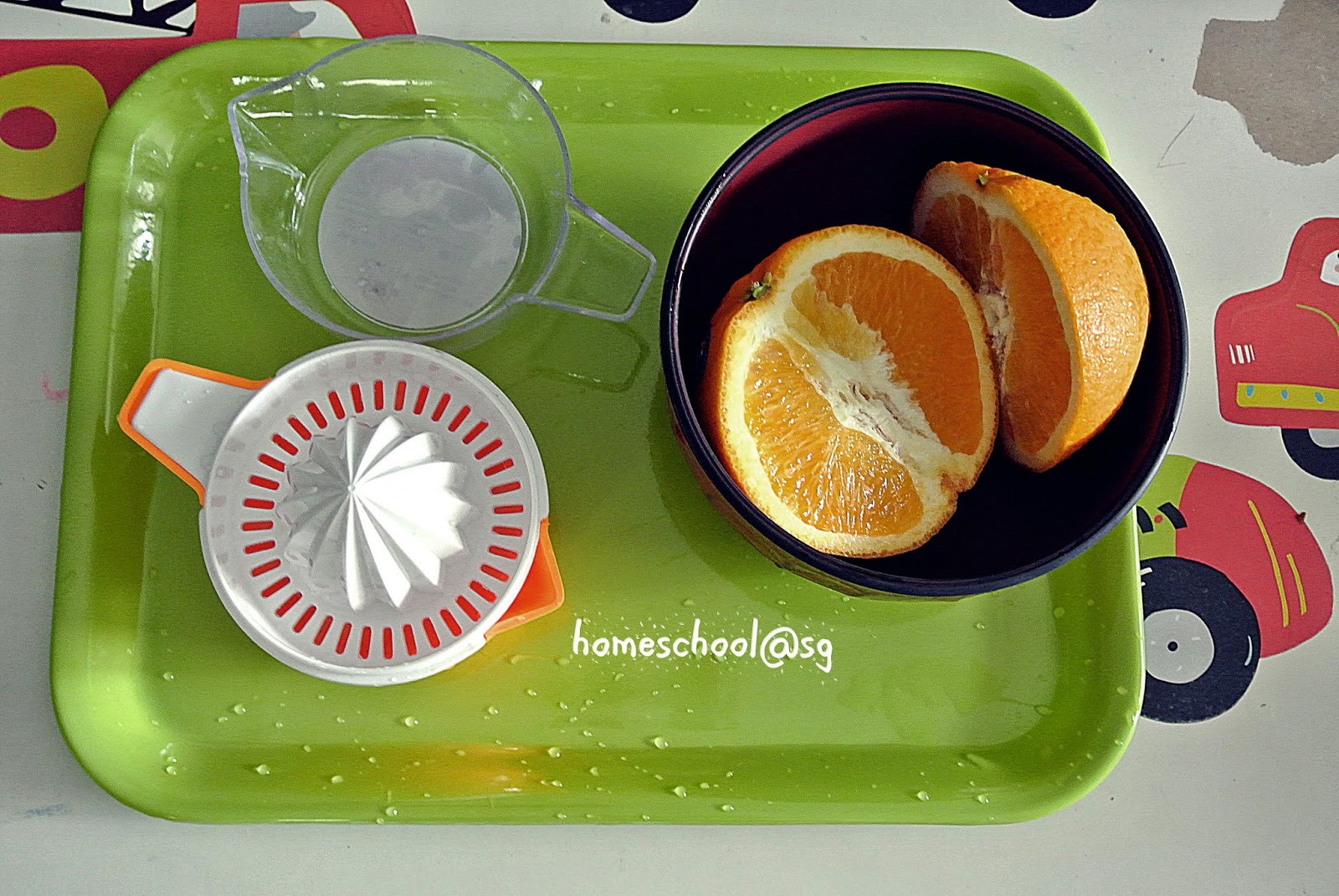 My invitation tray to play! Well, an invitation was quite unnecessary actually! 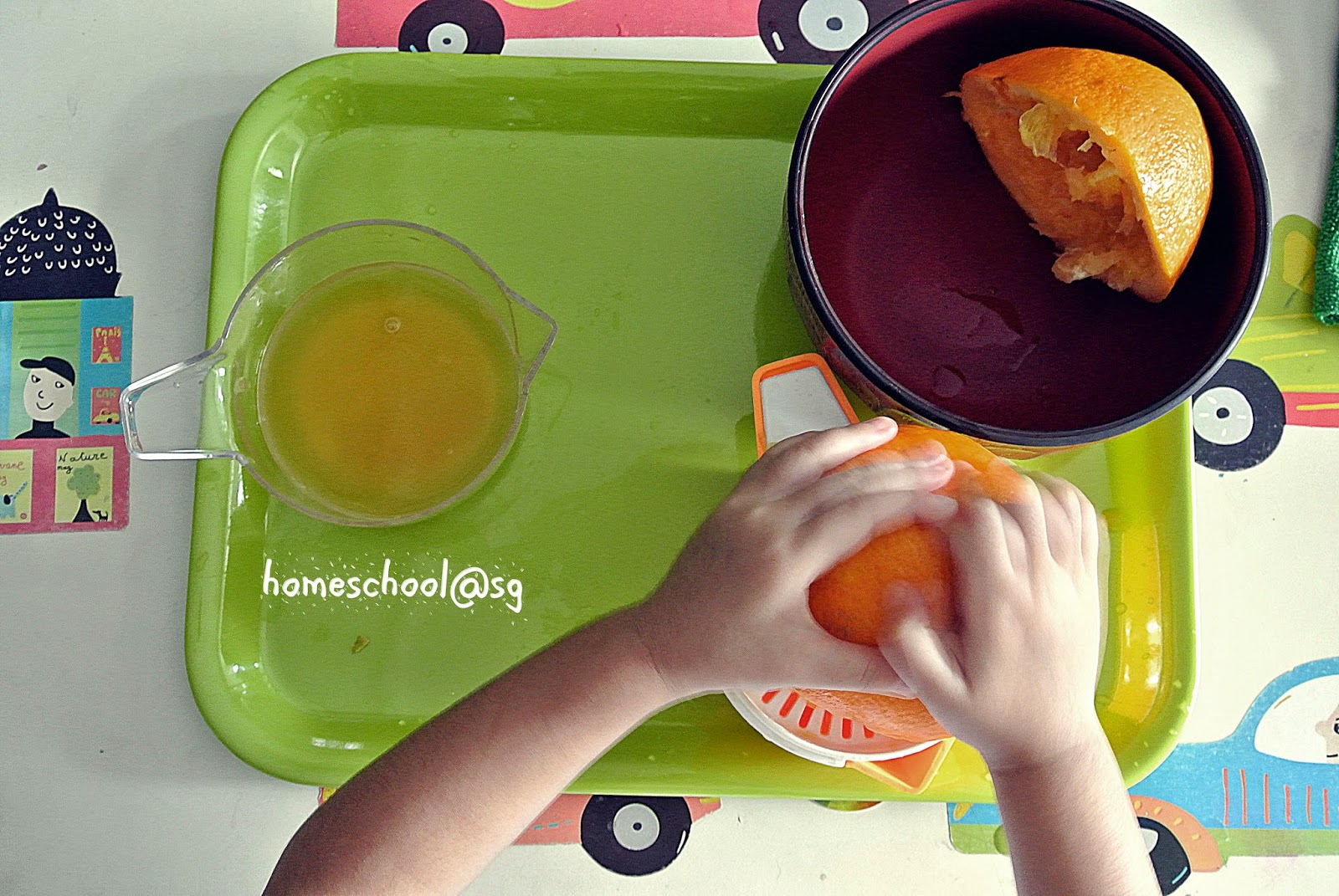 Squeeze, squeeze *grit teeth* *growl*
She had quite a hard time squeezing, she didn't have the strength. Still, she did not give up and could not keep her hands off the orange! 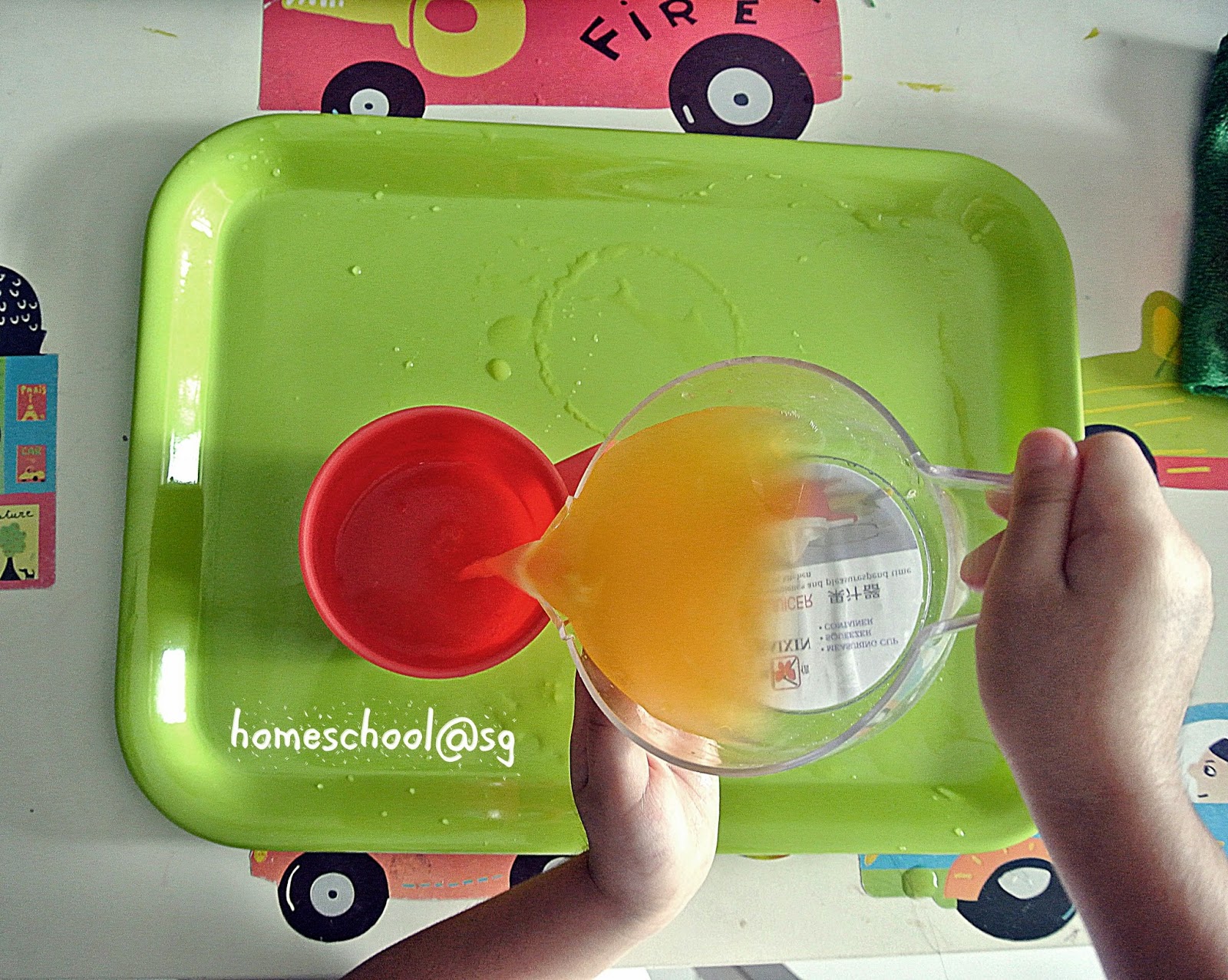 Good thing we had an HUGE orange that day because we extracted quite alot of juice!
Doll poured the juice into her cup (yes, another hidden practical life activity & chance for her to practise pouring- this time with a purpose!) and generously shared with me!
It was absolutely yummy!

Posted by homeschoolsg at 11:39 No comments:

This past week, I have been focusing on practical life activities. Oh okay, I have been too lazy to plan Doll's home activities, so I decided to whip out our everyday things for her to dabble. 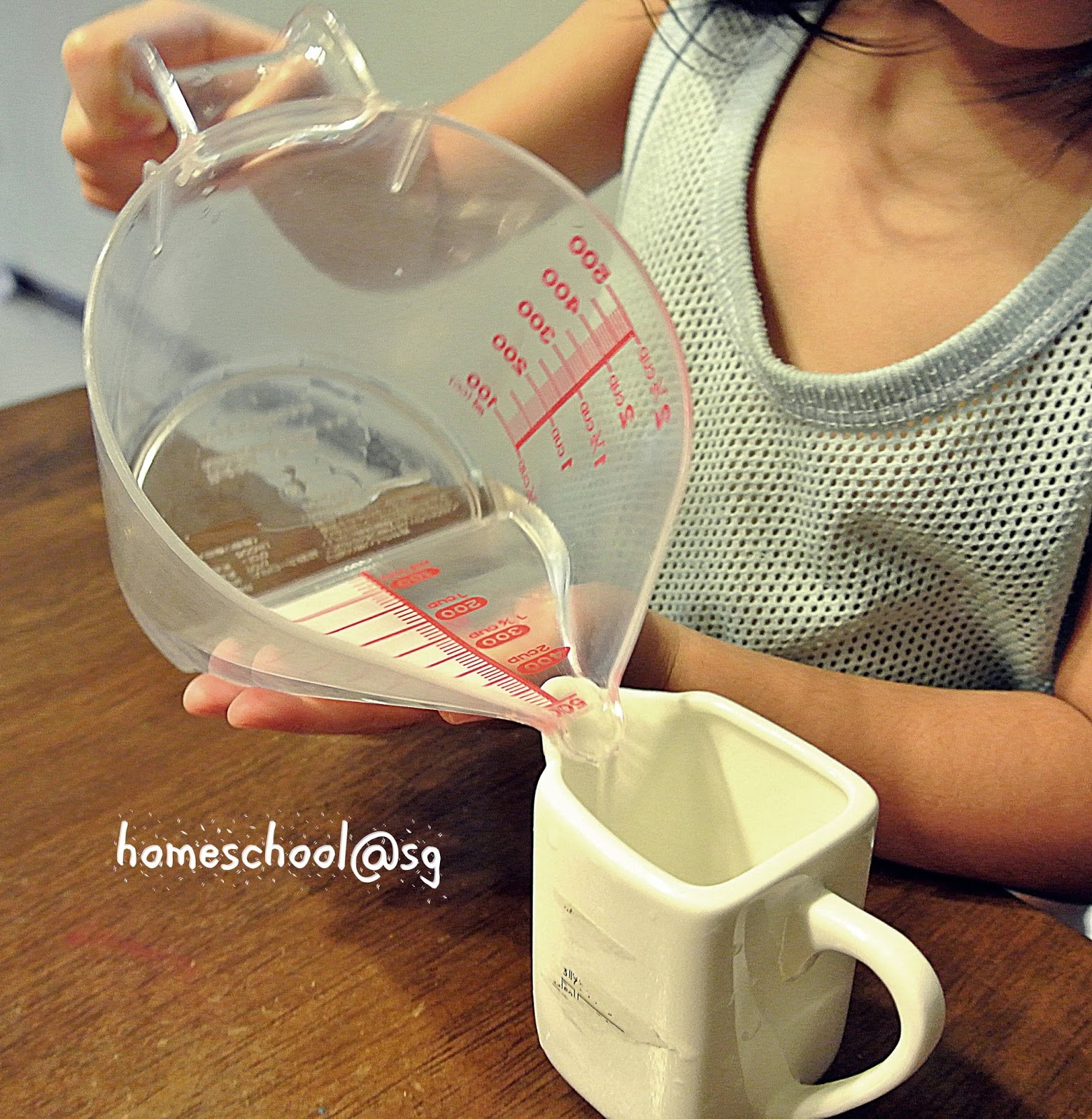 Learning to pour.
To make it a tad challenging, I deliberately chose a small jug for her to pour water into. I made sure she positioned her hands correctly when holding & pouring the filler. Obviously, it was no sweat for her. 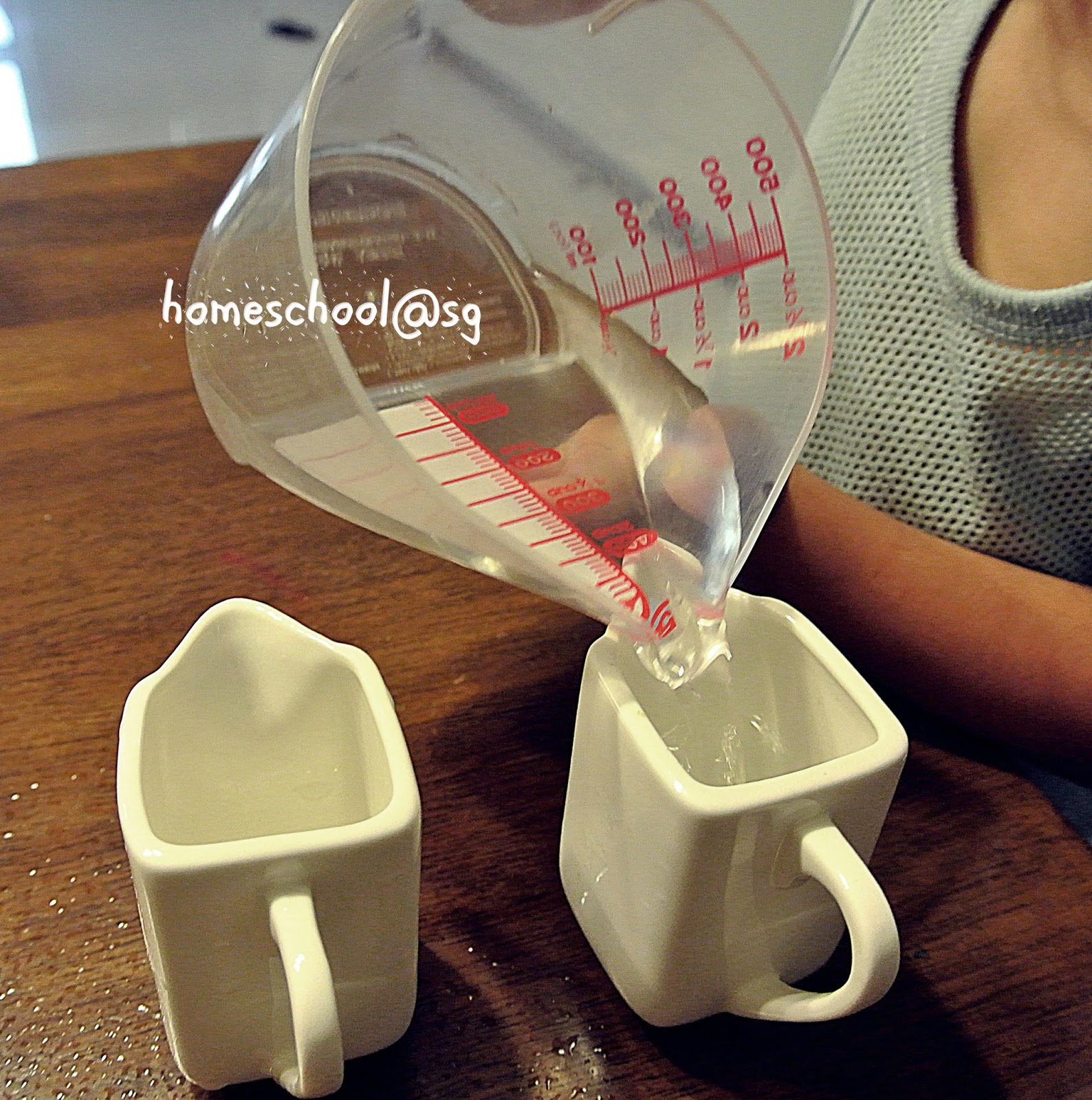 I notice young kids do not have the discernment to know when to stop pouring. They will continue to pour as long as there's still water in the filler which of course means, the jugs will end up overflowing with water.
So I gave her two jugs and filled the filler with water just enough for the two jugs. I wanted her to make proper judgement when to stop filling the jug i.e I reminded her she should stop when the water level in the jug reached to a certain level. 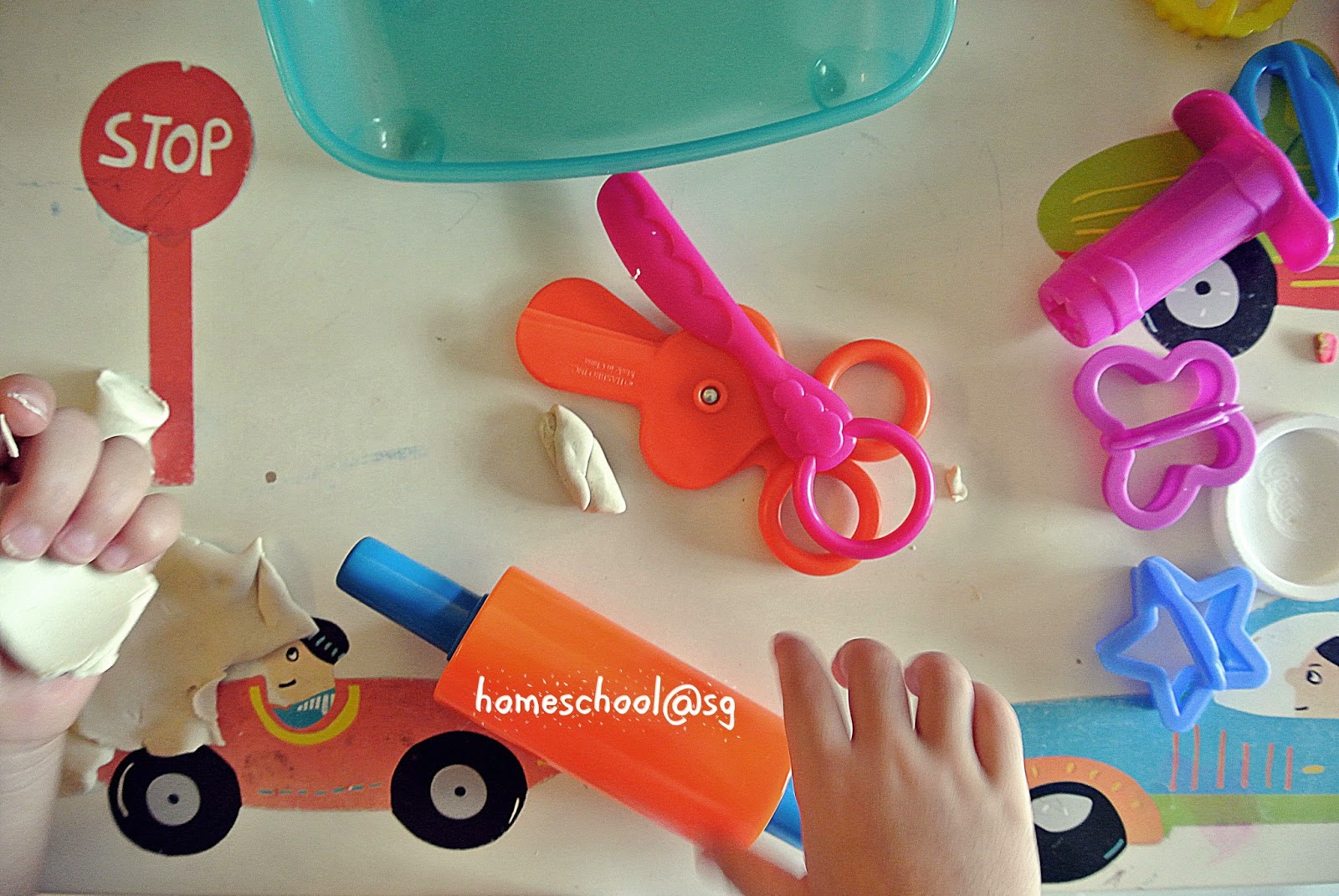 The other no-brainer practical life activity is to work on Playdough! I gave her a rolling pin, scissors and a slicer and let her work away! As she played, she was unknowingly exercising her pincer grasp and fine motor skills. WOOT! 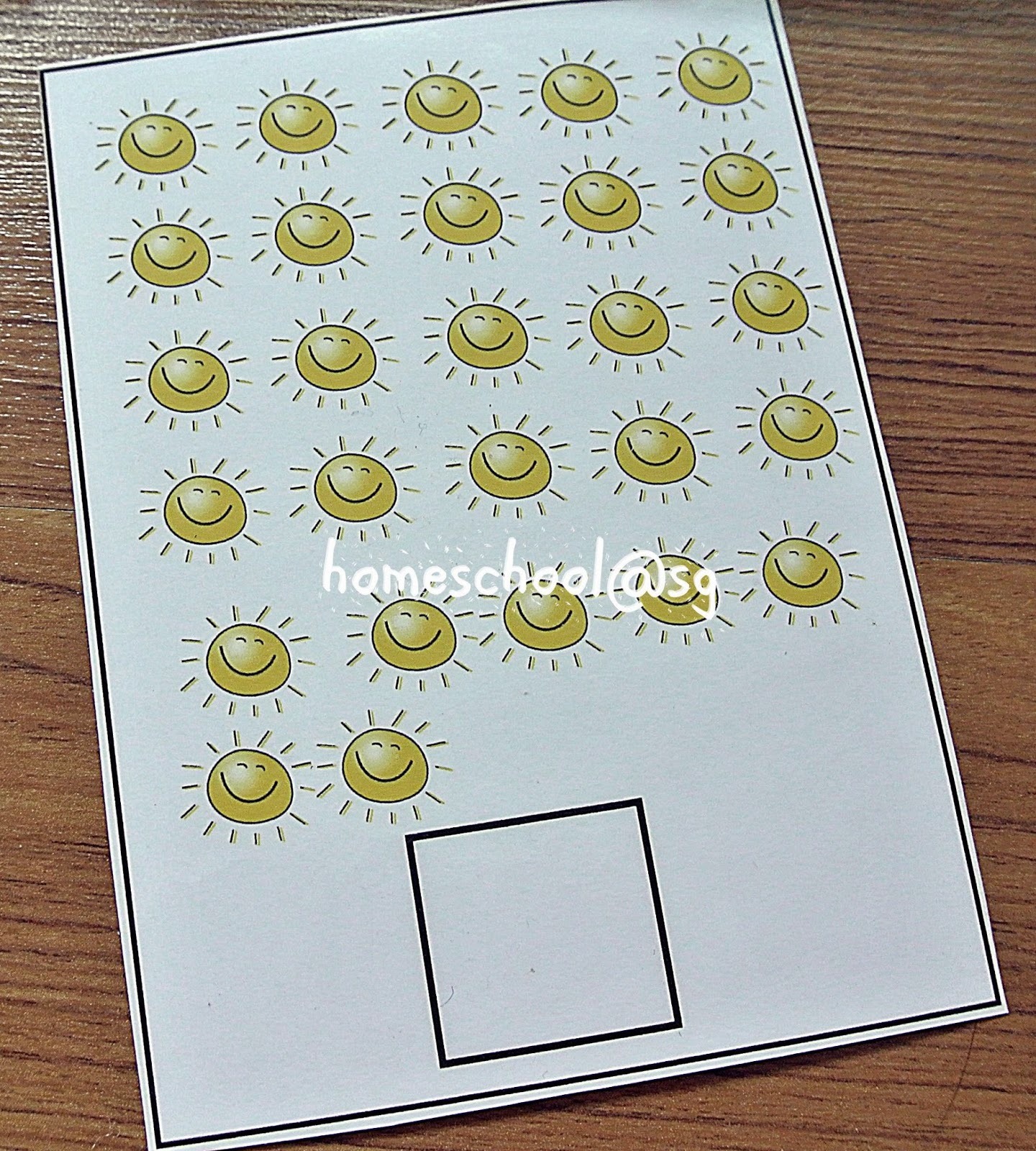 Remember this counting card? I decided to use it again! 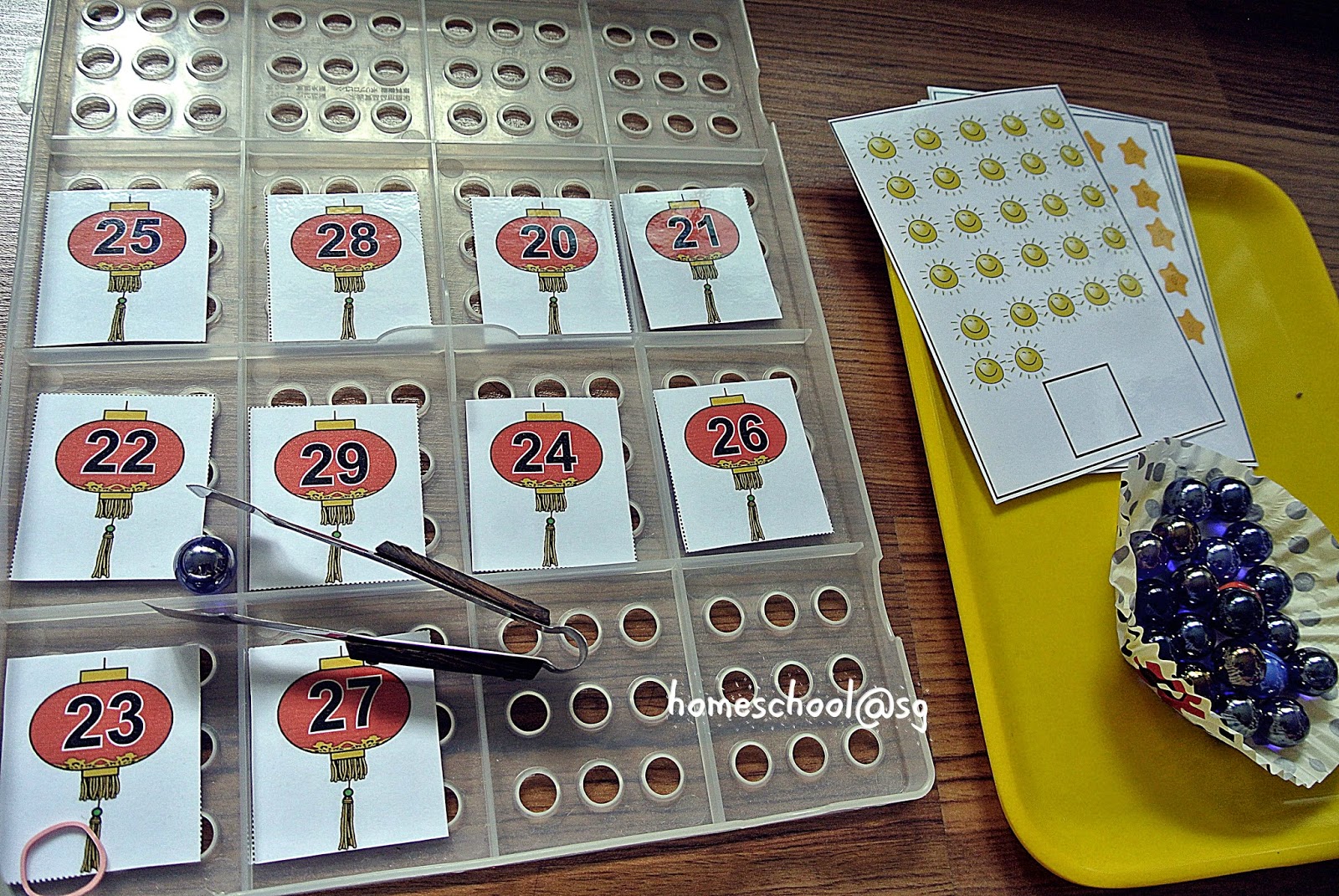 Posted by homeschoolsg at 17:00 No comments: