Hello! It's the school holidays here on our sunny, scorching island! Ah, I mean, it's the 'about to end' school holidays! Like most Singaporean families, we took a short vacation abroad, met up with friends and spent some family time.
This is the last leg of the school holidays and we are seizing each day as much as we can! Today, we spent our afternoon at Kids Stop. Needless to say, the kids had a blast! This place reminds me of the Children's Museum we visited in South Korea, Seoul. However, Kids Stop is alot smaller, dimmer (it bothers me that the lighting at our Science center is consistently dim & dark- why so?) and loud. The children's museum in Korea was 4 storey high, bright, spacious and very clean. Of course, they have bigger land too. ANYWAY! I am not complaining! I am just thankful there's a place like this here in Singapore! I remember when I was in Korea I wondered why we didn't have a place like this in Singapore. And now we do! It is almost like my wish came true!
Here are some of the highlights of our trip: 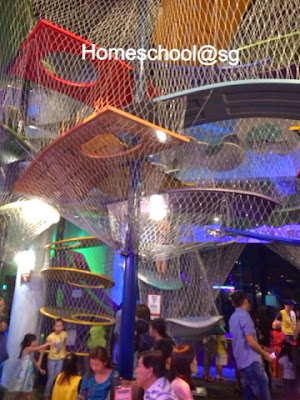 There's a suspended mid air erm, playground? This will surely thrill he older kids to no end. The route brings you all the way up high. I envy my son, it looks like a lot fun! 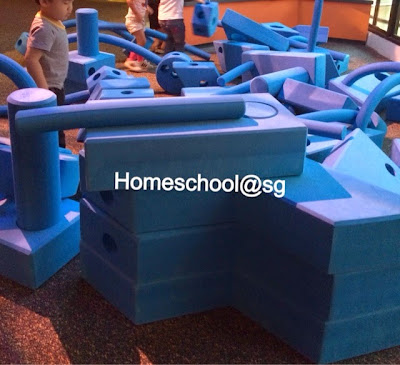 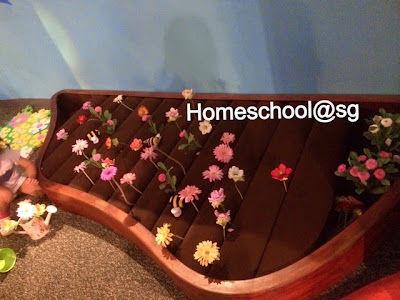 I love this pretty little corner. Flower planting anyone? 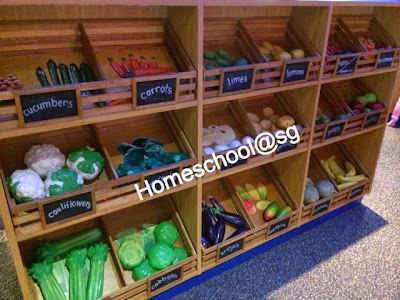 And oh my the Supermarket corner! Wow-ed me to bits! 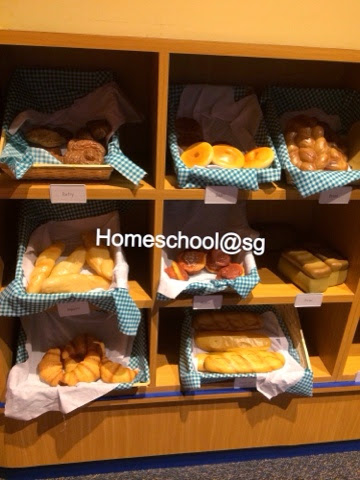 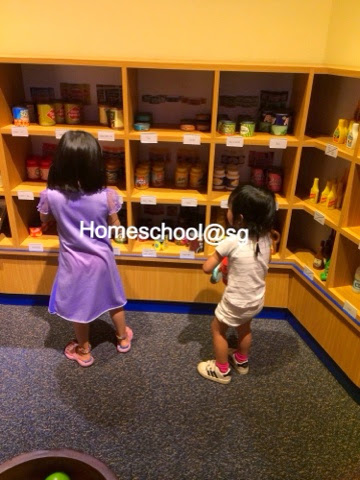 A galore of food condiments to buy just like the real world! 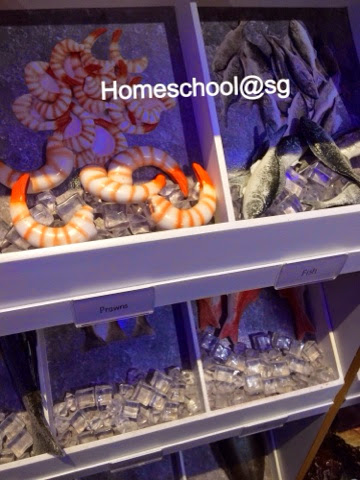 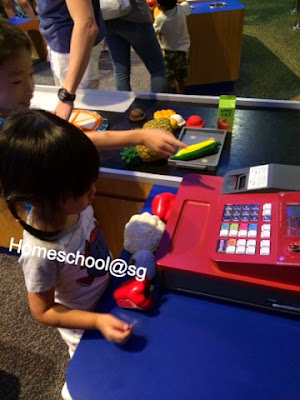 At the check out counter. You can scan the food items over the scanner and it really makes the 'beep' sound! 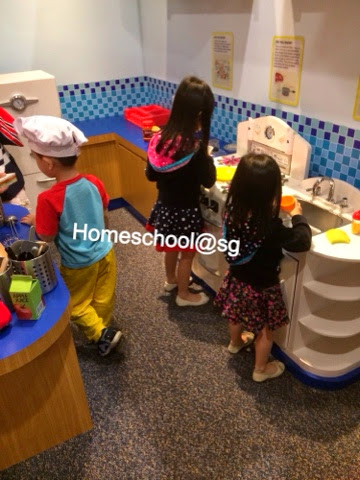 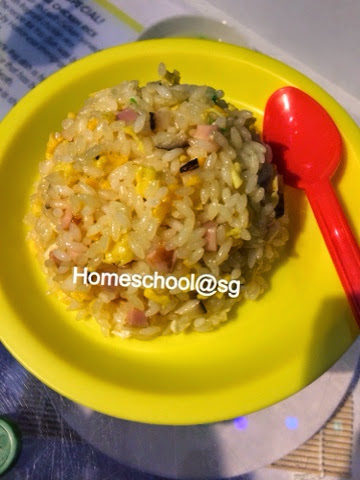 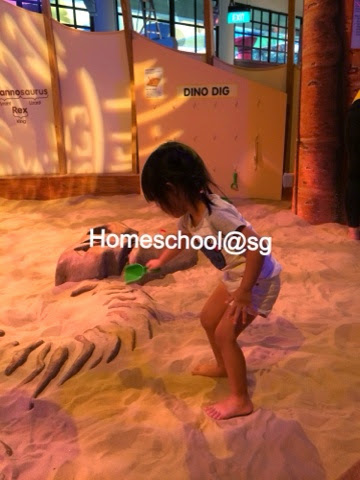 For the dino lovers, time to dig up some dino fossils! 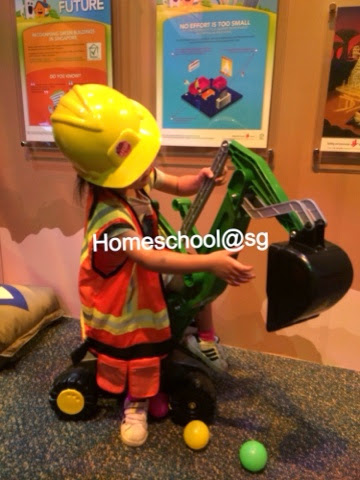 A small little construction area for kids to pretend to ride on a digger & push a wheelbarrow full of cement sacks! 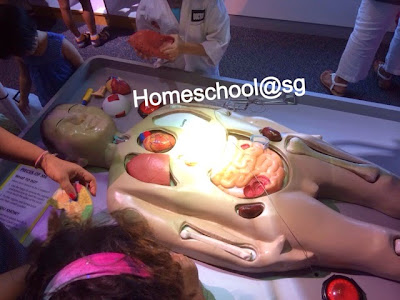 For the aspiring doctors! 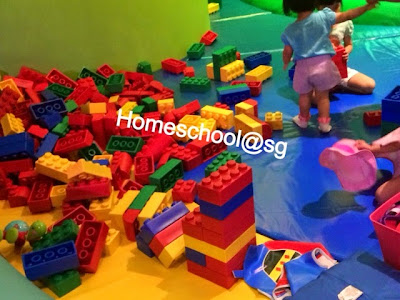 And this area is specially reserved for the little ones up to 3 years old. It is blow up size of Lego blocks and the kids can build it up just like typical Lego bricks!

There are a couple of other areas to explore like the mock up of an airplane cockpit, solar system and more. For more information click here.

My take is, this is a place worth to visit with the kids! If you have older kids, you can literally sit out and let the kids run amok. The area is enclosed and safe. However, if you can avoid school holidays, please do! It is absolute chaos and crowded during the peak period. But absolutely a must try!
Posted by homeschoolsg at 18:48 No comments: 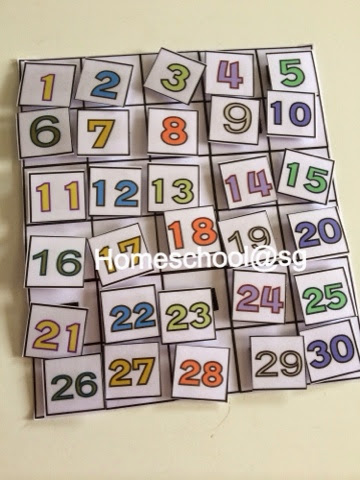 I have finally uploaded my number board printable.
You can download it here for free!
Enjoy!
Posted by homeschoolsg at 15:35 No comments:

Preparing for Primary one (part 2)

Aside from academics preparation, parents should also consider preparing their kids in other aspects like life skills and outer physical needs. Here are some of my list.

1) Obviously, learning to buy their own meals is an essential skill. They need to be able to count money, order appropriately, learn to queue, where to queue etc. I won't elaborate on this as this is quite apparent to most parents.

2) Toilet hygiene. What? You say? Well yah. I read from Ing, who was a former Primary one teacher and now a blogger, she realised some kids didn't know how to clean themselves after a big business in the toilet. Right up to 6 years of his life, I have been cleaning for Sonshine after a big poo. I just didn't trust him to clean himself well. But after reading her account, I realised it was an important skill to learn!

3) From another teacher's account, she noticed some girls don't know how to tie their hair and of course she had to help them. So if you have girls, teach them the know how!

4) Personal hygiene. Again, from a teacher's account, some kids don't know how to clean up after themselves after a meal. Even during meals, their sense of personal hygiene is quite poor. Teach your kids to wash their hands before & after they have their meals at recess and to clean their mouths with tissue after meals.

5) For me, I was worried that Sonshine didn't know how to zip & unzip his pants. Up till then, he always had to pull up or down his pants, never to zip or unzip. It didn't occur to me that he needed some practice until his very first day of school. But fortunately, he picked it up quickly. If your kids need a longer time to practise, make sure you let them try to put on and take off before they start school.

6) Taking care of their belongings. It is very common that primary one kids lose their things. While you should be mentally prepared to never see their stuff forever and standby multiple lunch boxes, water bottles, pencil cases, pencils, erasers etc. You should also teach your kids to have a sense of ownership for their belongings. Honestly, I don't know how to. Maybe, 2-3 months before school starts, let them carry a belonging out and make them accountable for it. Before we go out, I ask Sonshine to remember what he brought out of the house and he is to make sure he brings everything back home.  I'm very fortunate. Sonshine rarely loses his things & we didn't prepare him for this at all. There were occasions he forgot to bring his stuff back, but he always get them back.

7) Handwriting. Sonshine has been penalised a couple of times because of his less than perfect writing. Some teachers are lenient some are not. Sonshine was marked wrong even though his answer was correct just because he wrote '2' without a curve at the top. Even though it was a multiple choice answer and it's obvious that he's answer was a '2' the teacher still marked him wrong. Some teachers are less gracious like that. While his mandarin teacher would correct his writing but still grant him the mark because he's answer is not wrong. What I'm trying to say is, don't assume every teacher, even at Primary one, is lenient. Some can be quite strict. Hence, if your child has less than average handwriting, do give him more practise before school starts.

1) I know most parents are concern about buying the appropriate bags for their kids. I don't have much tips here but if every school is like Sonshine's, in primary one, you don't really need an ergo bag. He's bag is pretty light on most days. He only needs to carry his Chinese textbook back & forth. Personally, I think ergo bags are not necessary for primary one as it is too heavy for the kids and not worth to lug around if they only need to bring little things. But to each their own. :)

2) Stationery. This is one thing I learn; stationery is very important! I thought we can let him use cheap pencils, erasers, sharpeners and what nots. I chose cheap ones because I was afraid he would lose them. Gradually I realised it's important to invest in good quality stationery. Take erasers for instance. Sonshine's fine motor skills is not strong. He needs to put in a lot of strength when erasing and we could still see the shadows of his previous answers. In his case, it's important to get him a good quality eraser to help him erase cleanly and with less effort. Same for color pencils. I could see his coloring improved (he hates coloring) after we invested in a good set of color pencils). So far, Fable Castell stationery is working great for us!

I hope these pointers help! As for academics, I observe that most children, who attended kindergarten, are well prepared. There's really nothing much to fret about. Of course this also depends on the schools. Some schools have higher expectations than others. But in general, I think most kids will do well. I think even the average student can hit a score of 90 marks for every subject, even 100 marks is attainable. Yes it is that easy; at least that's how it is for our school. As long as your child has been doing good in his or her kindergarten, I don't think there's much to worry about. Not now at least. I think the nightmare will only start later half of primary two or start or primary three. What is important in primary one is to get the kids into the groove of doing homework, revising & taking ownership of their own school work. Laying this foundation is very important for later years. The first year is the best year to train them up because in the following years, we probably need to focus more on their studies.
Posted by homeschoolsg at 17:08 No comments:

Email ThisBlogThis!Share to TwitterShare to FacebookShare to Pinterest
Labels: Prep for Primary One 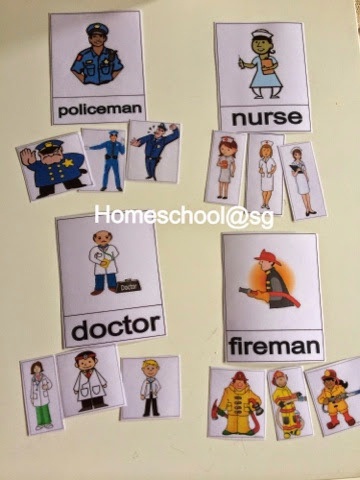 I made another set of learning material for our recent trip! Learning about occupations! This is to help her make sense of who's who. She knows what a doctor is but not the rest. The goal is for her to match the smaller cards to the master cards. At first, I'll say aloud the occupation of each card she chooses. Soon after, she would say it herself. It's an easy activity, something kids will pick up very easily. Still, it's entertaining for the preschoolers!
Posted by homeschoolsg at 13:58 No comments: 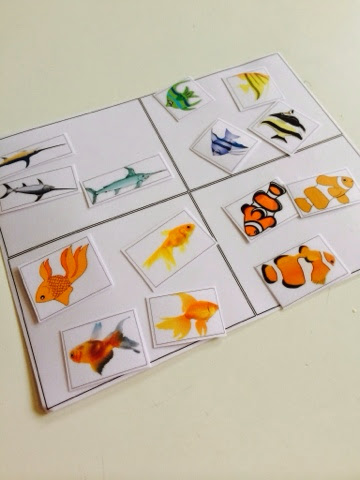 We all know sorting is an important foundation to have for learning math. It helps that most pre-schoolers enjoy sorting too! There are so many things and ways to sort; makes sorting activity never a bore. Dolll loves to sort & I love to prepare sorting materials to entertain her while we are on the go. I've made a few for her but this was the latest one I made for our recent overseas trip: sorting fish!

I wanted her to learn & see for herself that fish comes in a whole load of variety. Also, I wanted her to use her senses to differentiate & group the fish in the same category. I prepared four types of fish, clownfish, goldfish, swordfish and angel fish. As she groups them, I say their names aloud.

I love this learning material. It's easy to prepare and light to carry around. Best thing is I can always whip it out and entertain Doll while we wait for the food to be served!

Posted by homeschoolsg at 13:51 No comments:

Here's an inspired Montessori number board I made for Doll. She was learning her numbers from 20-30 and it took her a while. Also, I wanted her to have a visual of the number sequence. I created it this because we were went away for a few overseas trips & I used this (& some other stuff) to entertain her on the go.
Also, she had some difficulties in differentiating 12 & 22; 23 & 13 etc. So I wanted to lump all the numbers together to help her see that these numbers are not alike. Again, took her a while (also I haven't been doing much work with her).
I'm pleased to report that she's finally able to differentiate the numbers! I would have made the number board a little different though. I should have arrange them in tens rather than fives in a row. I might have to re-do.
** A side note: thank you for all the new likes on my FB page! I'm sorry I haven't been updating much on this blog! Hope I'll regain my inspiration!
Posted by homeschoolsg at 12:51 No comments: