The Sun, Pluto and heaven

photo credit
Yesterday, I had an interesting discussion with Sonshine. He started by throwing me a question. He asked me what was the name of the robot (I was later told it was a spacecraft) that reached the dwarf planet, Pluto.
I had no clue! I shot that question to my husband over the watsapp and found out that it was called NASA The Horizon. Feeling very intellectual, I shared that information with Sonshine and even tried to challenge him by asking him if he knew how long it took for the spacecraft to reach Pluto. I had ' almost a decade' as the answer but he quickly shot back, '9 years'. I was stumped. I was sure my answer was correct because during our staycation at Shangri-La Hotel last weekend, we had a copy of National Geographic. It was then I read that the robot or spacecraft, took 'almost a decade' to reached Pluto. But my 8 year old boy's answer was even more specific than that!
Apparently, he read from that same copy of National Geographic that the craft left earth in 2006 and so, he did his own calculation. I was stumped because as I recall, he barely read the magazine nor was interested enough to look at it. As far as I remember, he merely flipped the pages for a few seconds. I even tried to interest him to read but he shrugged me off. I had the impression that he wasn't interested so I left it as it was.
How wrong was I.

I regretted not taking back that copy because he went on to ask me more questions.
'How fast was the robot travelling?'
'Would it be flying to the other dwarf planets?'
'What is the coldest DWARF planet in the WHOLE UNIVERSE?'
'How cold is Pluto?'
'Why can't that same robot go on to other planets? WHY? WHY?'
And the very knowledgeable me replied 'I don't know, I don't know, I don't know'.
But he wouldn't let me off and kept on with his questions until I convinced with some sort of answers.
And as I was trying to sift out the answers on google for him, I found out about another dwarf planet called Ceres. I offered that information to him thinking it was new to him only to be told that he 'already knows'. He could even tell me Ceres is positioned after Mars. I discovered he also knew all the 5 known dwarf planets to date, its names and even their locations.
All of a sudden, I felt really stupid.
Our conversation led on to the Sun and that was when I shared that the scientist believed that there would be an explosion on the Sun and us earthlings would only have 12 hours to protect ourselves. He responded with a flurry questions, when, how, why etc. But what amused me was that he concluded that the scientist will eventually invent a shield to protect the earth. And that God will give the mortals some sort of ear muffs to protect their ears from the sound of the explosion. I told him but it won't happen until a billion years later and he said he was thinking for the future humans in a billion years, LOL!
We went on to talked about the universe, God and heaven. He said that he believes In heaven there is no time. I thought he learnt that from the children's church but he said no, he simply said 'I KNOW that'. And he is quite right.
He also asked me where is Heaven.
I told him it is beyond the universe.
And that was when he suddenly said this
"I want to live in the same house as you"
"But, you are living in the same house as me!" I retorted
He said "I mean when we are in heaven."
''Why?'' I asked.
''Because I love you''
And that concludes the day when my son made me feel really stupid but really, really loved.
Posted by homeschoolsg at 10:43 No comments:

Ah yes, I already own one Montessori board but my itchy fingers just needed to make another one for Doll. I simply LOVE DIY stuff! I couldn't resist doing it after seeing these woods in Daiso. JUST-GOT-TO-MAKE-'EM!
If you desire to own a hundred board but don't want to splurge on one. Here's a cheap way to make your own. And easy too! 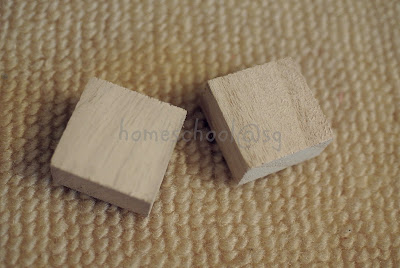 You can get these babies from Daiso. It comes with 18 (if my memory didn't fail me) of these in one pack for just $2! You need to get about 5 packs and that just cost you $10 in total! 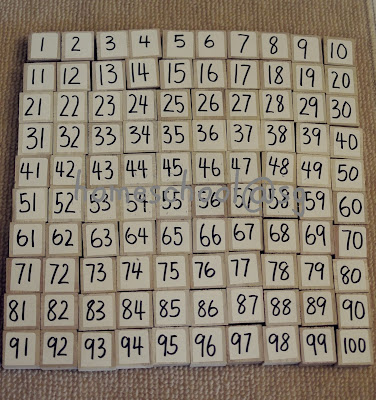 You can either write directly on the wood or get those sticky labels. I did the latter. LOVE the effect. And oh, what happens when the child is done with these? You can convert them into free play, wood blocks! How's that? Play and learning incorporated in one, and it's affordable! Now do you know why I love DIY stuff?

Posted by homeschoolsg at 10:59 No comments:

'Wood' you read with me?

I am narrowing my learning with Doll to just reading and counting. I am slowly accepting that I have barely enough time nor energy to do anymore than that with her. Here's what I have been up to. 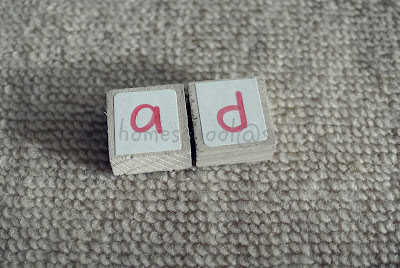 I absolutely love Daiso wooden blocks! This idea was birthed when I saw my good friend's post over at Playhood. I just had to make my own! I used these blocks to teach Doll phonics and reading. All I had to do was stick the labels on each block of wood and write down the letters.
This week we are learning the words within the 'ad' family.
First, I had her sound out the 'ad' word. 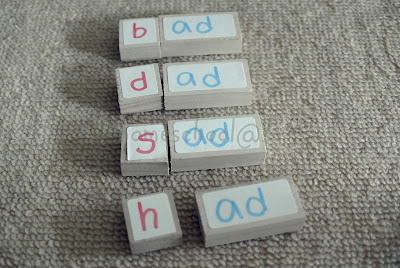 I took out the consonants and have her sound out the individual letters before combining it with the 'ad' blocks. We sound out the words together. 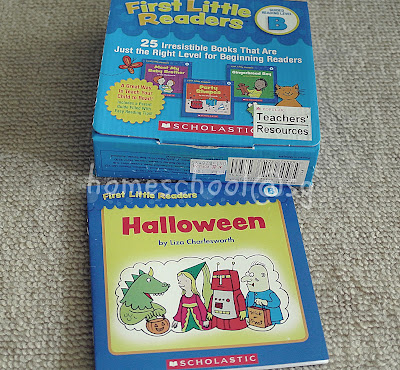 Besides phonics, I am also teaching her to read by sight. While she is able to read simple sentences, but I want to speed it up.(I am surprise by some of the words she knows. Must have been picked up during our read aloud time together) So I purchased this series of readers from Popular book shop (even though I have tons at home already). I am using these books to work on her reading. I am pleased that she is able to read some books on her own. Now, we have to tackle the other books. 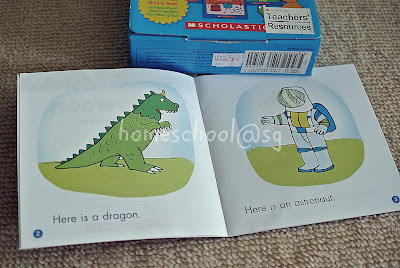 As usual, I always go for books with simple sentences with repetition. 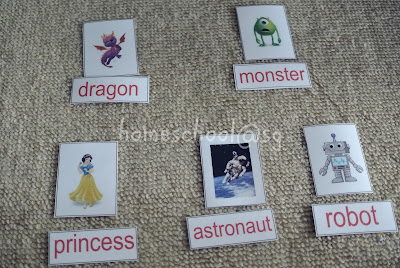 I made labels for her to learn the new words. I must say she picked up the words pretty quickly. Must be her sensitive period now.

Posted by homeschoolsg at 10:52 No comments: