Mandarin is a subject that sends parents scurrying to tuition centers for help. A lot of us have no clue how to teach and are helpless in the language. I was too when my eldest was due for primary school education and I sent him for Chinese class in panic. However now that he is primary 3, I have sort of figure out how to work around this subject. Hence, my second child is spared of the extra class.
I cannot say that my teaching is so excellent that she has mastered the language. Far from it. Yet, I think she has learnt quite substantially, enough to be able to read and understand simple mandarin text. I dare say she is even better than her brother at this age.

It is possible to teach mandarin ourselves without relying on tuition centers. Of course certain factors are a must like, having some knowledge in mandarin and the spare time as well as patience. If all you have all the favorable factors and you want to teach your own child, here are some useful resources you can consider using.

I recommend using one main one ie not use every single one simultaneously. Don't confuse and stress the child.

Here are some recommended book resource one can use to teach a preschooler at home. 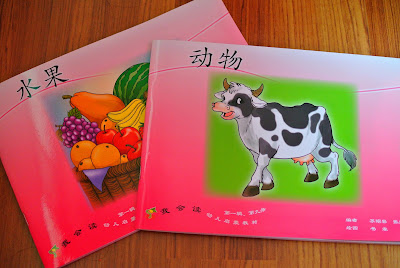 我会读 series is a set of mandarin books that comes in varying levels. The simplest level which is the pink series has one word per page. Every word is followed by a picture that explains the meaning of the word. Very much like flashcard but compiled in a book. I think this set is great for very young kids or beginning readers who are especially adverse to mandarin.

As the child goes up each level, the books will transition into simple sentences and later more complex sentences. 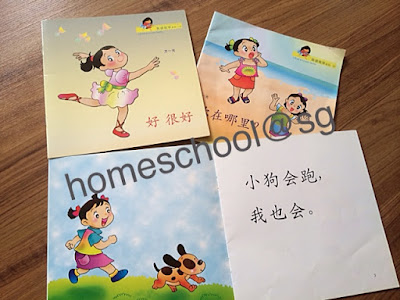 This is another set of simple mandarin books. Unlike the first series, it comes in sentences. It focuses on a particular word per book. It is very simple and easy to read. I reckon that by the end of mastering each book, the child should be able to speak and understand simple, basic mandarin sentences.

I have to add that this set is not readily available. I bought this straight from the publisher during a book fair. Look out for upcoming book fairs and see if you can find them! This is another series that cannot be bought off the shelf. I think I also bought it from a publisher who set up a cart in a shopping area.

But this is another simple book, with basic sentences. It also focuses on a certain word or phrases per book. The level is more sophisticated than the above series. 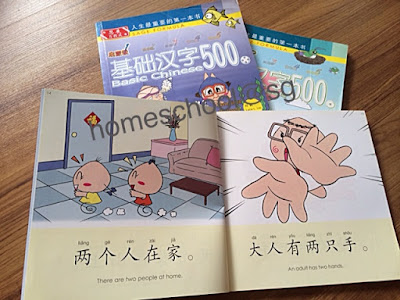 This series can be easily found in Popular book shops. Unlike the previous two, it comes in hanyu pinyin and even an English translation. The pace of learning is a lot faster than the above books. Many new words are introduced at the same time. I recommend this for older kids who are already somewhat familiar with the language. 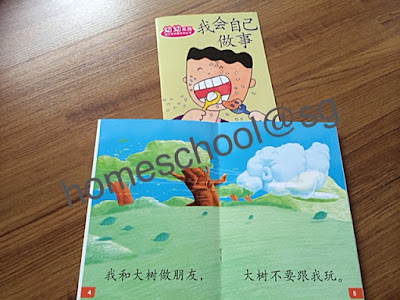 I suspect many kindergarten schools are using this set of books to teach the students. Again, it is not readily available at the main bookshops. But, you can easily get hold of them at the second hand bookshop, Evergreen at Bras Basah. Alternatively, look out for mummies who are willing to sell their copies.

It is almost like a story book with repetitive words with a mix of new words being introduced. It comes with flashcards that is useful to teach word recognition. 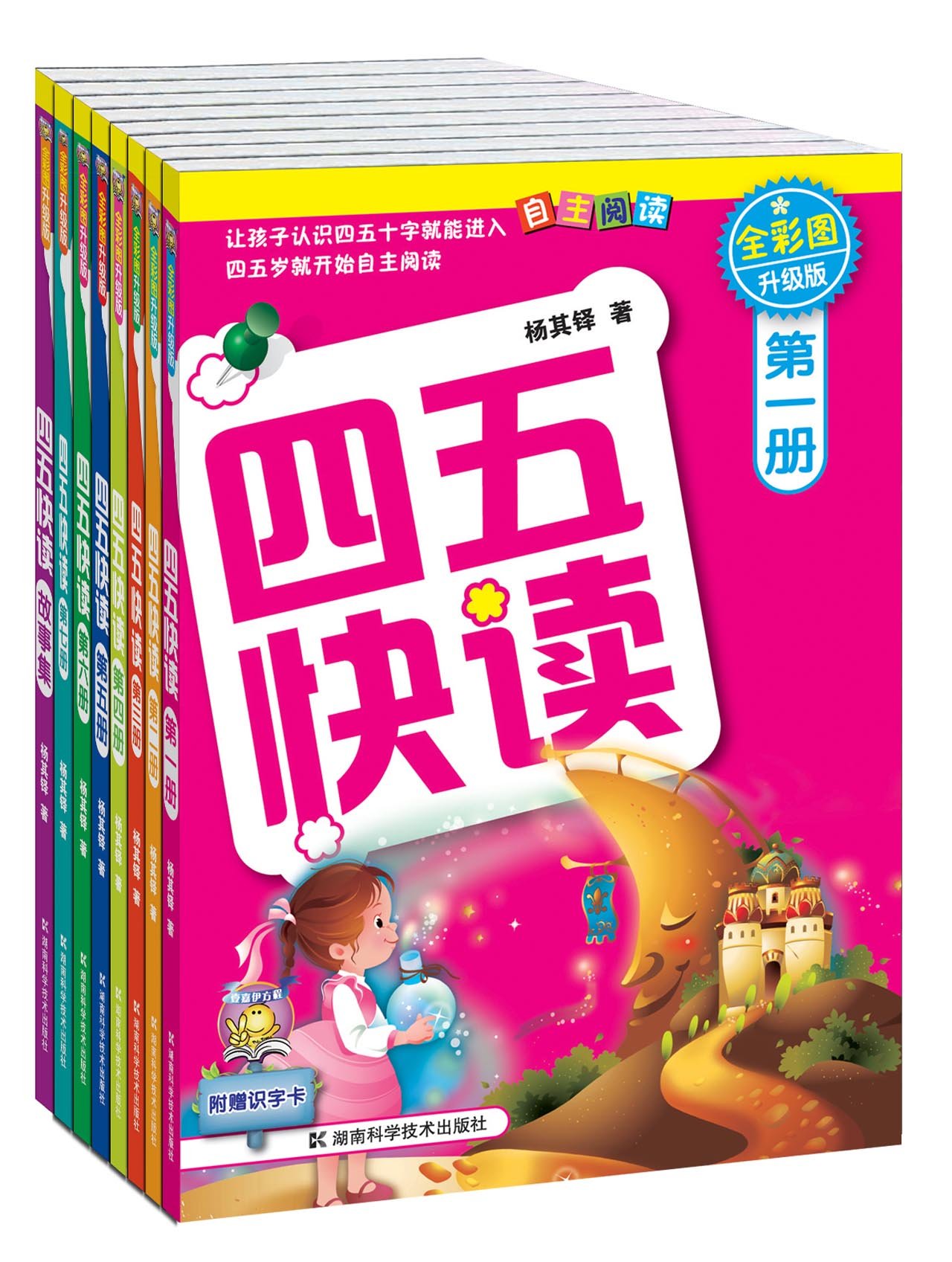 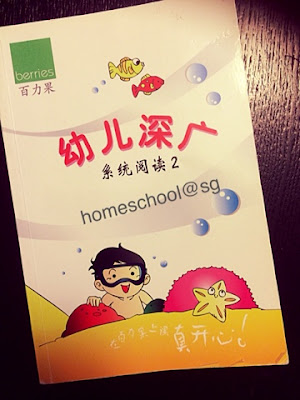 As I have wrote in another post, this is my favourite Chinese resource for teaching my pre-schooler. This series is akin to the Peter and Jane series. It is very systematic. Like Peter and Jane books, Berries books introduce a few new words in each chapter and repeated throughout the books. A note though, the above book pictured is an older version. Berries has published new books that are a lot more difficult. I find the pace of the new books are a lot faster than the old versions. I prefer to use the old versions as it suits Doll's pace of learning. Currently, this is the book that I am using to teach Doll. I highly recommend this resource.
The way to use theses resource is to use it like a storybook. First read to your child and then have the child repeat it after you. Have the child read the book everyday at least once. If you want to make sure that she really recognises the words, make your own flashcards or write the words in another medium and have her read it aloud. Make sure she is proficient in the chapter before moving on to the next. Don't skip the pages, don't rush through it, take it slowly according to your child's pace.
Posted by homeschoolsg at 10:52 6 comments: Links to this post

Email ThisBlogThis!Share to TwitterShare to FacebookShare to Pinterest
Labels: chinese

How I teach mandarin at home

Most, if not all, of Doll's kindergarten friends are attending tuition such as reading, mandarin and math classes. But Doll has none of that. Occasionally, I do get a bit jittery, wondering if she is missing out. Yet at the same time, I refuse to start her so early on tuition, it's just not right for me. I also refuse to allow all those tuition centers to capitialise on my fears and suck my money out from me.

But truth be told, I did try her out for a trial at a popular Chinese tuition center. I have  heard raving reviews of the center and never once heard of any kid who dislike the school. I was confident that Doll would love it there, even more so when I saw her skipping to the class with excitement. Who knew, she came out bawling and later resisted any suggestions to attend such classes. It's not the center's fault. She cried because she felt she couldn't keep up and got worried.
It seems that all signs are pointing toward no tuition for her. Hence I try to do what I can with her at home to help her keep at pace with her peers. I don't aim for her to be advance, I just want her to be prepared enough for primary school. Neither do I have hour long lessons with her at home. We are usually done within 15 minutes- almost daily, well I try daily.

One of the obvious aspect is for her to read in both languages. As with my earlier post, she's well into reading and I don't need to worry about that anymore. But mandarin is a challenge because we aren't fluent in mandarin. My husband speaks no mandarin. And I speak, ok but not -rich-in-vocabulary mandarin. So yeah, we are in trouble. Yet, I refuse to send her for Chinese tuition- yet. Like getting her on the road to reading English using Peter and Jane series, I got her to learn to read Mandarin using books published by Berries tuition center.

These books are meant for students attending the courses by Berries. But non students like me, can get hold of these books second hand. I bought mine from another mummy but I noticed the second hand book shops at Bras Basah sells a ton of them too! It's easily available. 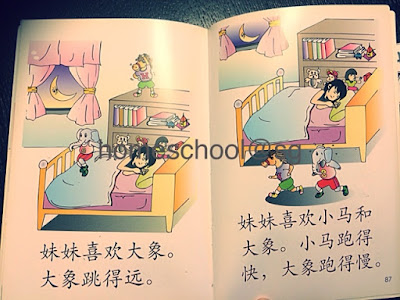 Like Peter and Jane books, I task Doll to read the berries books aloud everyday. Whilst she reads a page a day from Peter and Jane books, she is to read a chapter repeatedly everyday from Berries book. Once she is proficient in that chapter we move on to the next chapter. We have now completed book 2 of k1 level (mine are the old version) and are now on to book 3 ( there are 4 books in all).

Now there are many many Chinese readers resources out there but Berries books are my number one choice. Like Peter and Jane books, the words are repeatitive and new words are introduced at a gradual pace. It aims to build the child's vocabulary slowly, one chapter at a time. Over time, the child would accumulate enough words to read a simple Chinese book by herself.

As she recognizes more words, it is also easier to communicate with her in mandarin. At least now she has a bank of mandarin words in her brain and she can understand alittle. I can't say she can understand a lot (she complains that she doesn't understand her Chinese teacher at school) but we will get there- I hope (gulp).

I don't just get her to read the books. I know over time she may be just memorizing the words. So I made our own flashcards. I made sure she knows each and every individual word. I would even ask her what the word means and what other words can it be paired up with  i.e she reads "生" and she's expected to say "生日的生"。 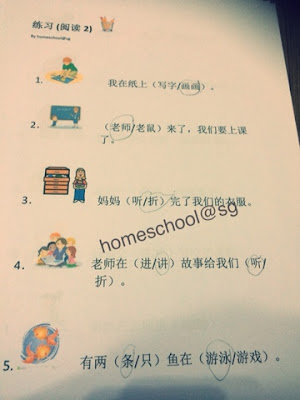 That's not the end. I even came up with my own worksheet according to her reading. I want her to be very sure in what she reads in the book before moving on. In the worksheet I created, I set questions to test her words recognition. I deliberately put words that look similar and test her to see if she can distinguish the two. 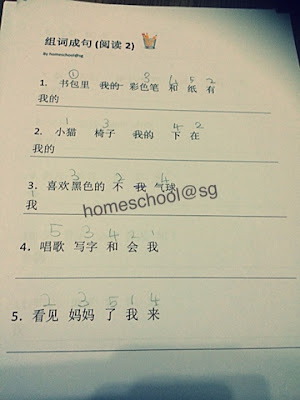 I also set word order questions where she has to rearrange the words in the correct sentence structure. 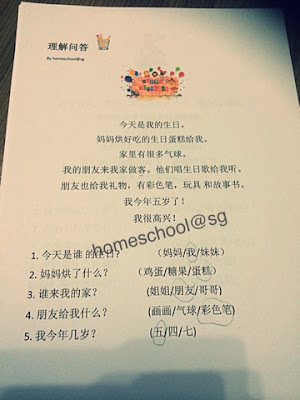 And also, comprehension passages. All the words in the passage are words that she has learn to read and understand from the book.

I seriously think it's more stressful for her to be taught under me than going to the centers. Yet, she refuses to budge and wants me to teach her instead. Oh well.

Posted by homeschoolsg at 19:46 No comments: Links to this post