I observed that Doll is ready to hold a pencil and do some tracing. Thanks to the brother, she has been inspired to pick up a pencil and just doodle away. At first, I left it as it is until I told myself I better cease this sensitive period before it passes me by. 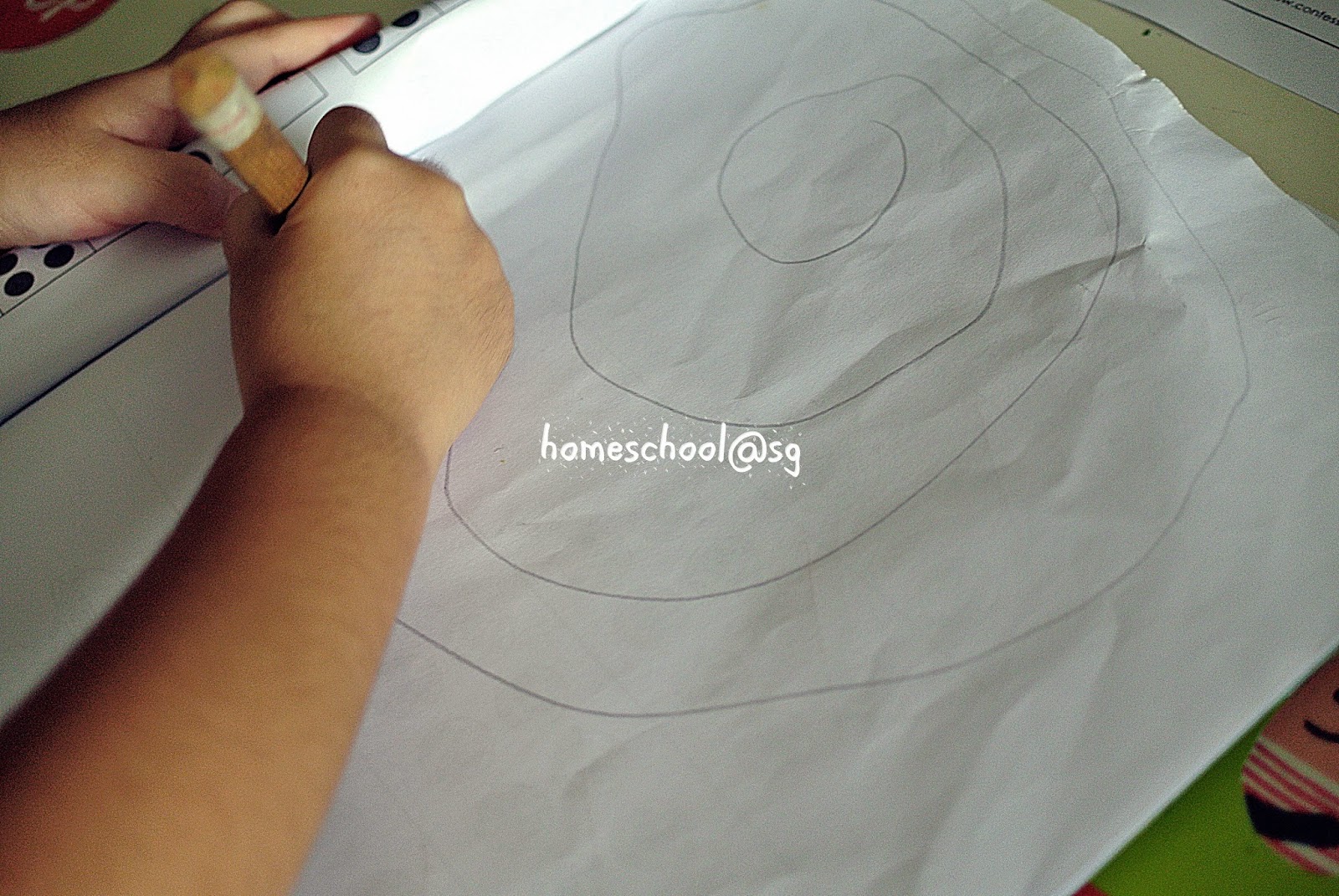 Most of the time, I just give a pencil, paper and simply let her doodle away! I want her to be comfortable in holding a pencil and experience the thrill of seeing how she can draw something just by holding a pencil. 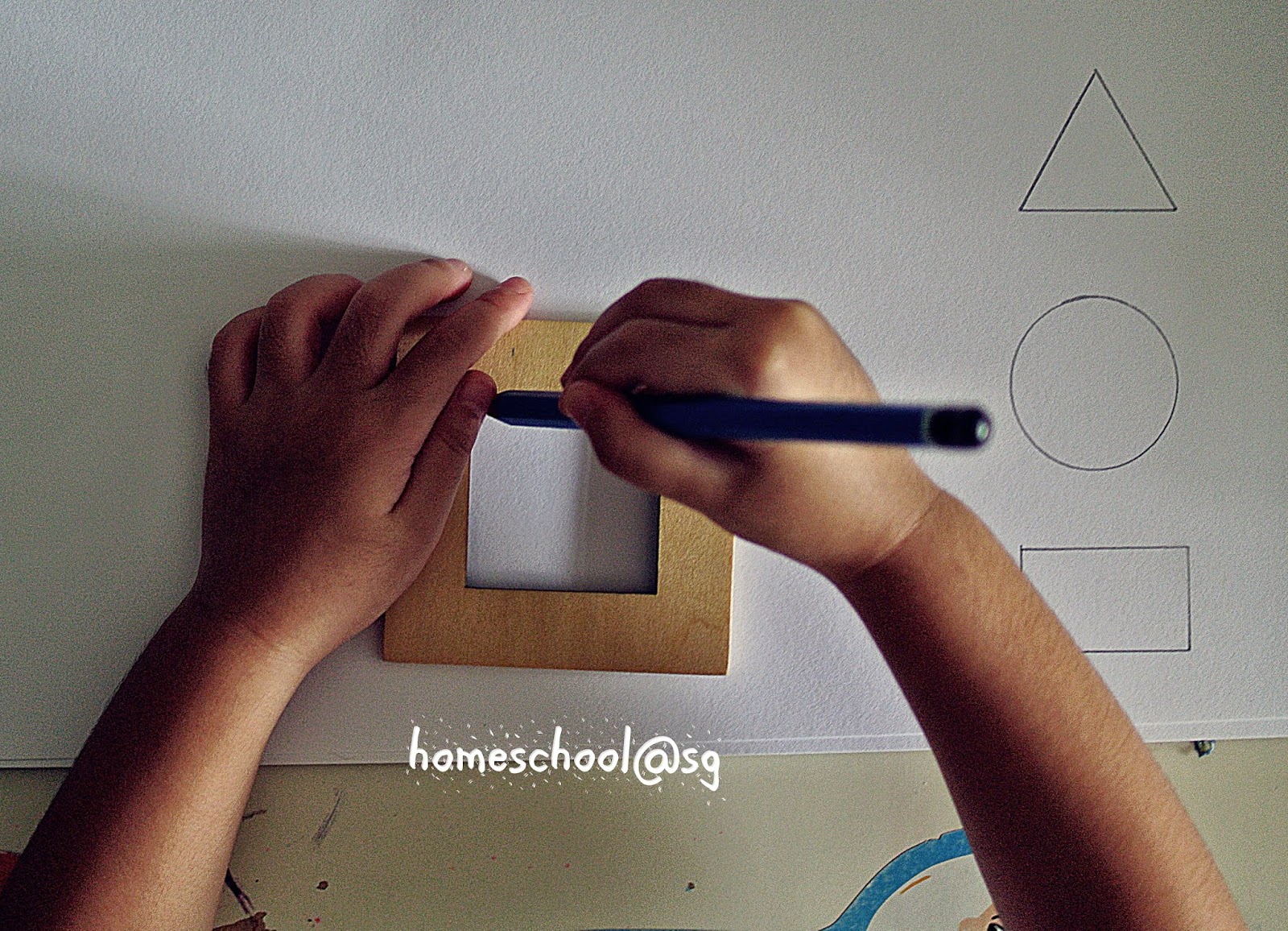 A Montessori activity, tracing Metal insets, except that mine is the cheap cousin of Metal insets- its wooden inset & smaller than the authentic ones. But it works just as well! According to Montessori, this is a prelude to writing; the child is to trace the inside shape of the inset.  (No she didn't trace the ones on the right of the drawing, it was done by yours truly)
If you don't own one but want to do this, you can always find those stencil rulers that come in differing shapes like circle, triangles and of different sizes too. Those work just as well and its CHEAPER! :D 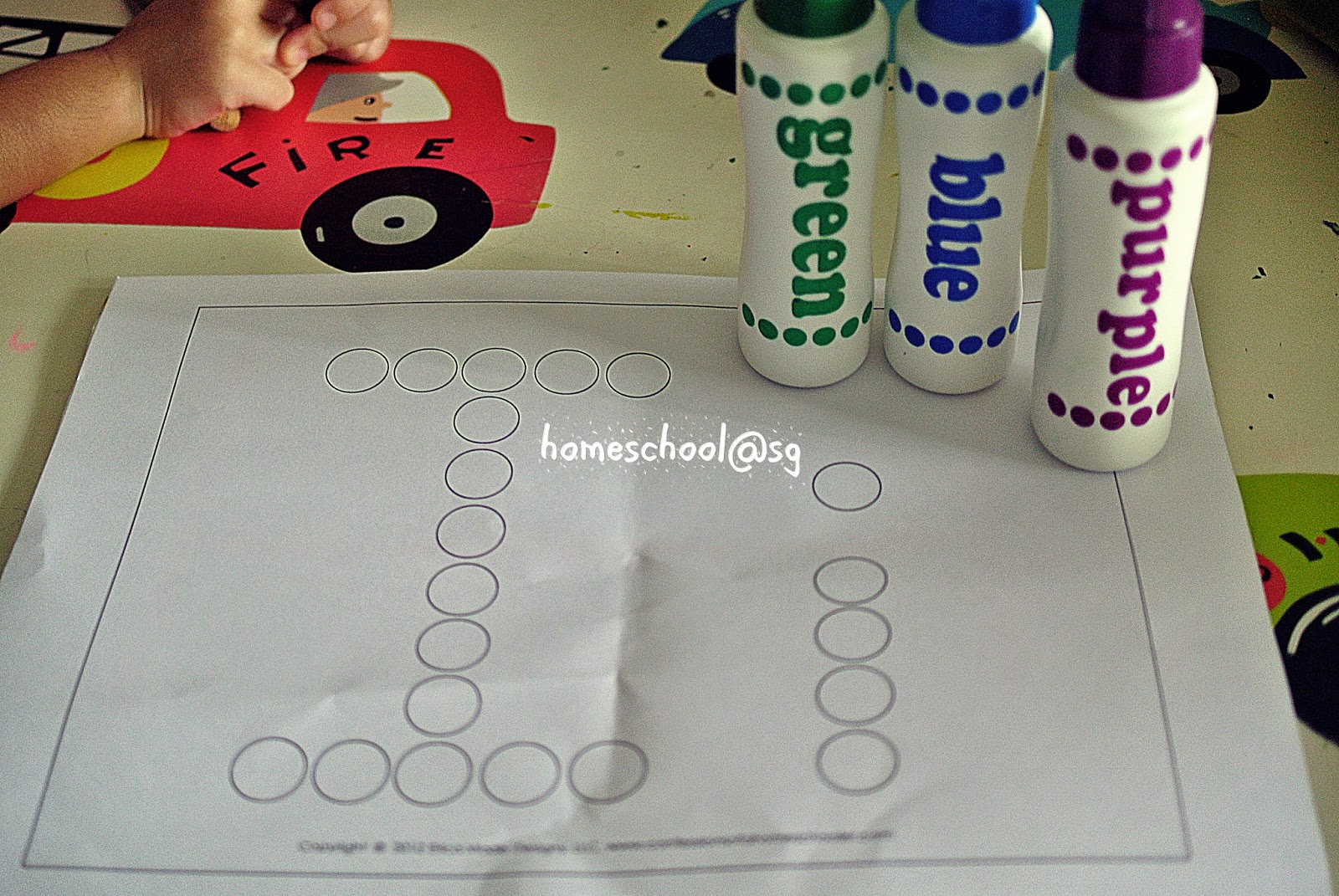 I have also started her on writing her letters. Just to interest her and to get a feel of the letters shape, I printed out the Dot-a-dot printable from Confessions of a homeschooler.
If you don't have the dot a dot markers, don't fret. I also used these printable and have Doll traced over them. What I did was to number the circles for her to trace over. The numbering on the circles help her to write her letters in the correct direction. 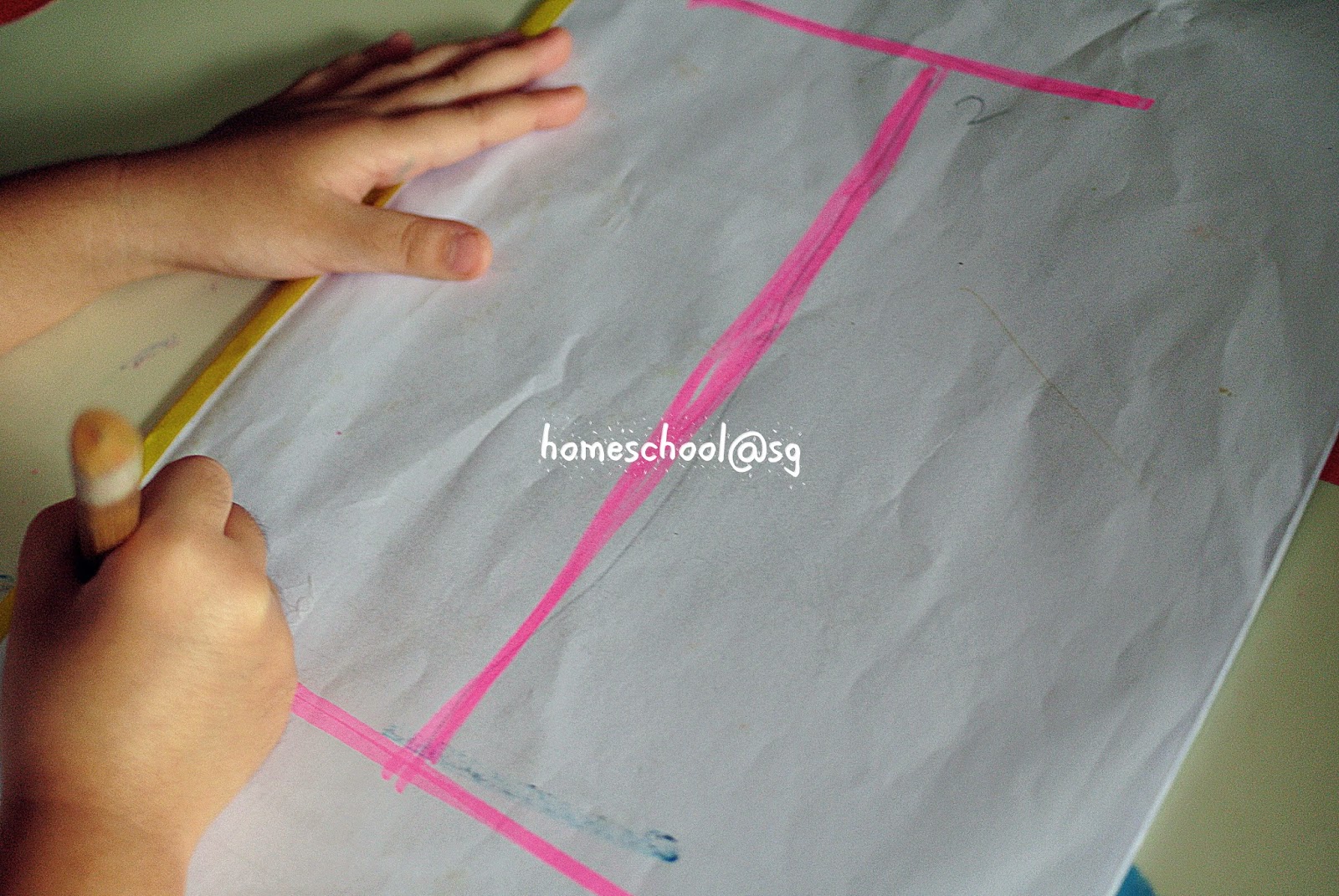 Alternatively, you can also write out the letters using highlighter and have the child trace over it. It works as well and at no cost! :) 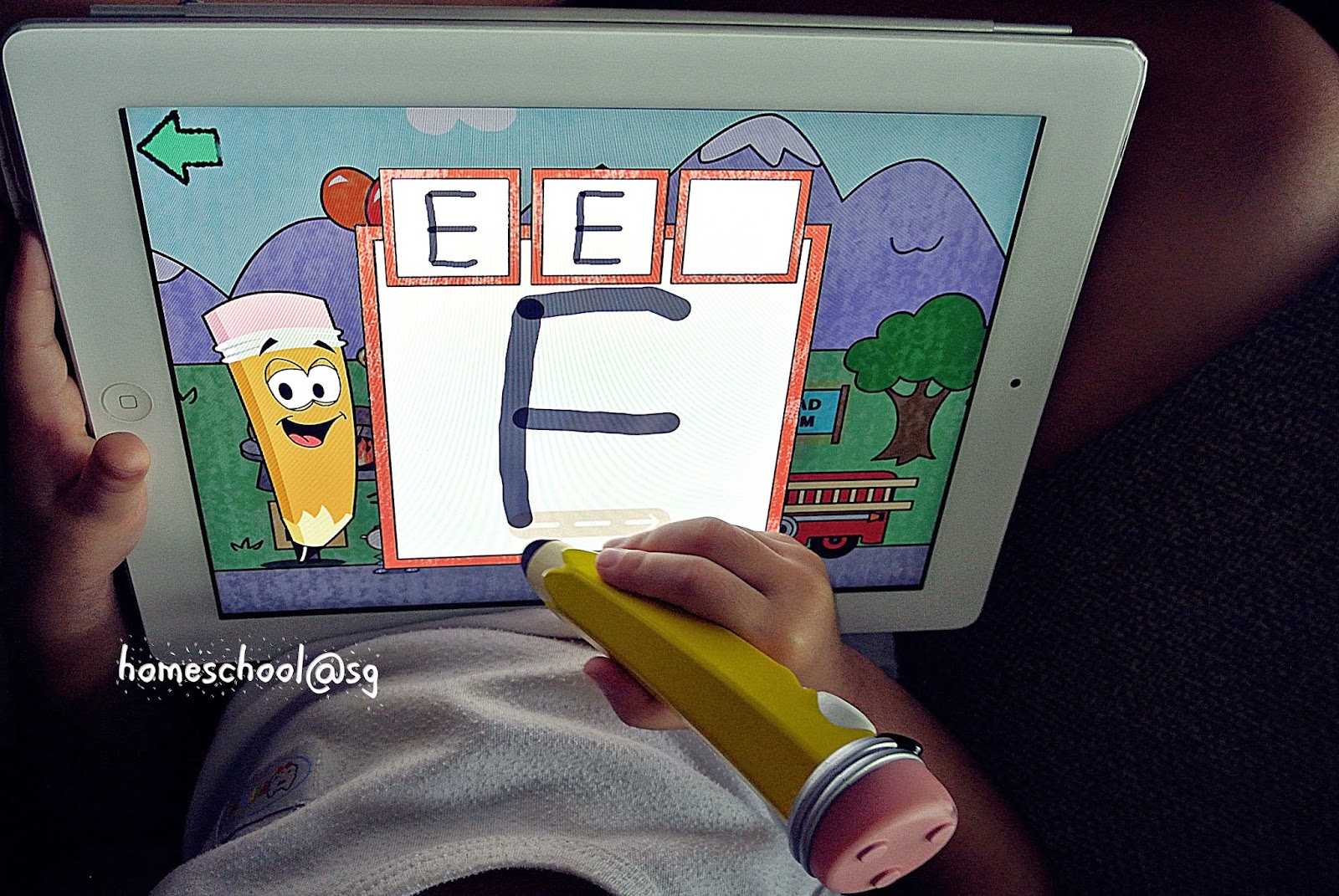 I splurged on the Leapfrog Mr Pencil. It's not costly, but I find it's an unnecessary buy. Still, it did help Doll to learn her letterings. I have been letting her trace the letters and from here she learnt how to write the letters 'E', 'I', 'F' etc.
I say its an unnecessary buy because I think there are many free apps out there for the kids to learn how to write the letters albeit without a pen. I find the Leapfrog pencil a little annoying because one needs to place the pencil in a certain position in order for the censor to pick it up. It can be frustrating & disruptive for the child when the app does not sense pencil motion.
I say don't buy because there are many cheaper and equally, if not more, effective than this pencil. 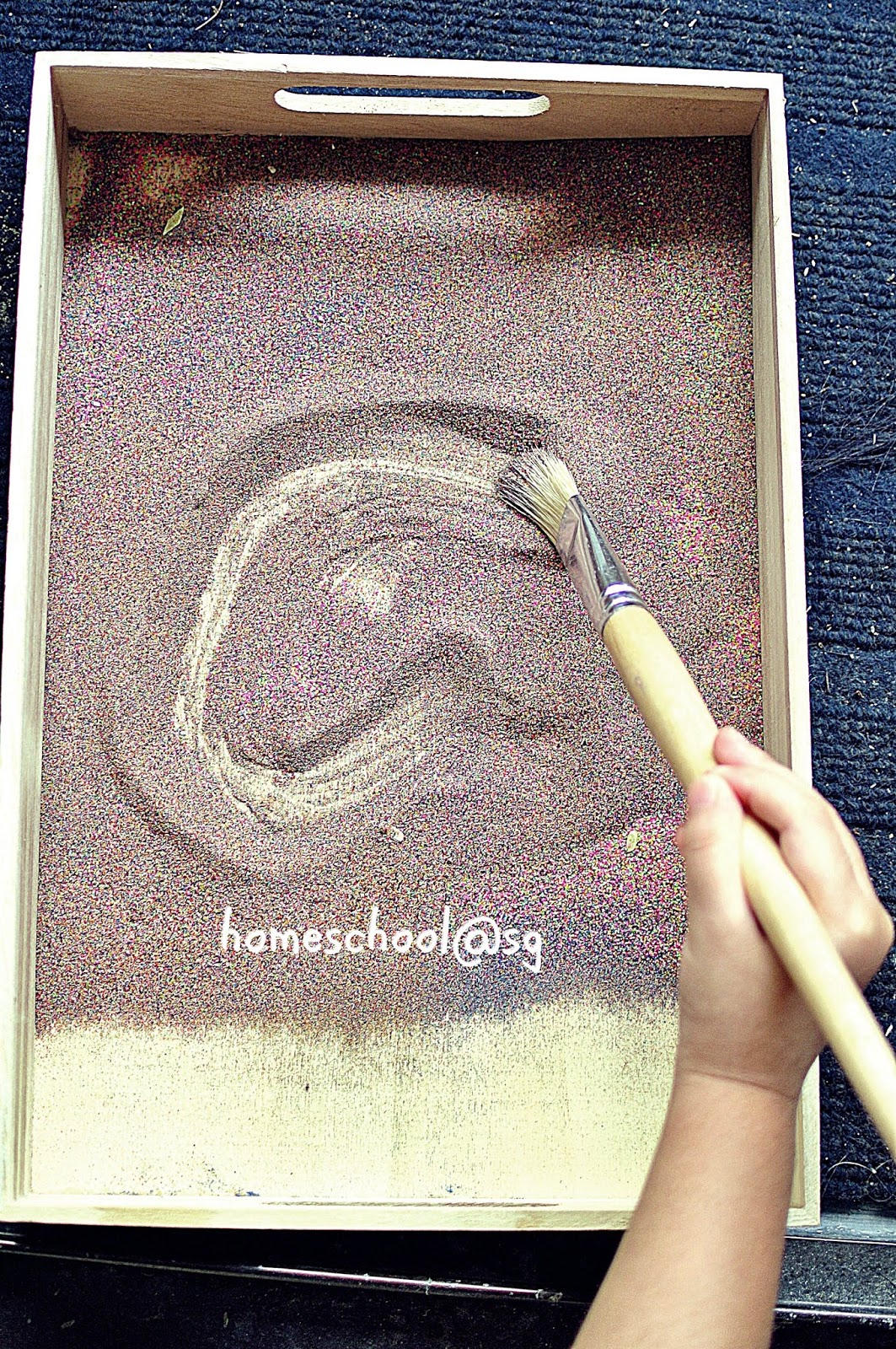 Posted by homeschoolsg at 09:25 No comments: Links to this post

I have been relaxing for weeks now but as usual I try to do things with Doll whenever I can. Such random times, I love to rely on everyday things or materials I've prepared eons ago. :P 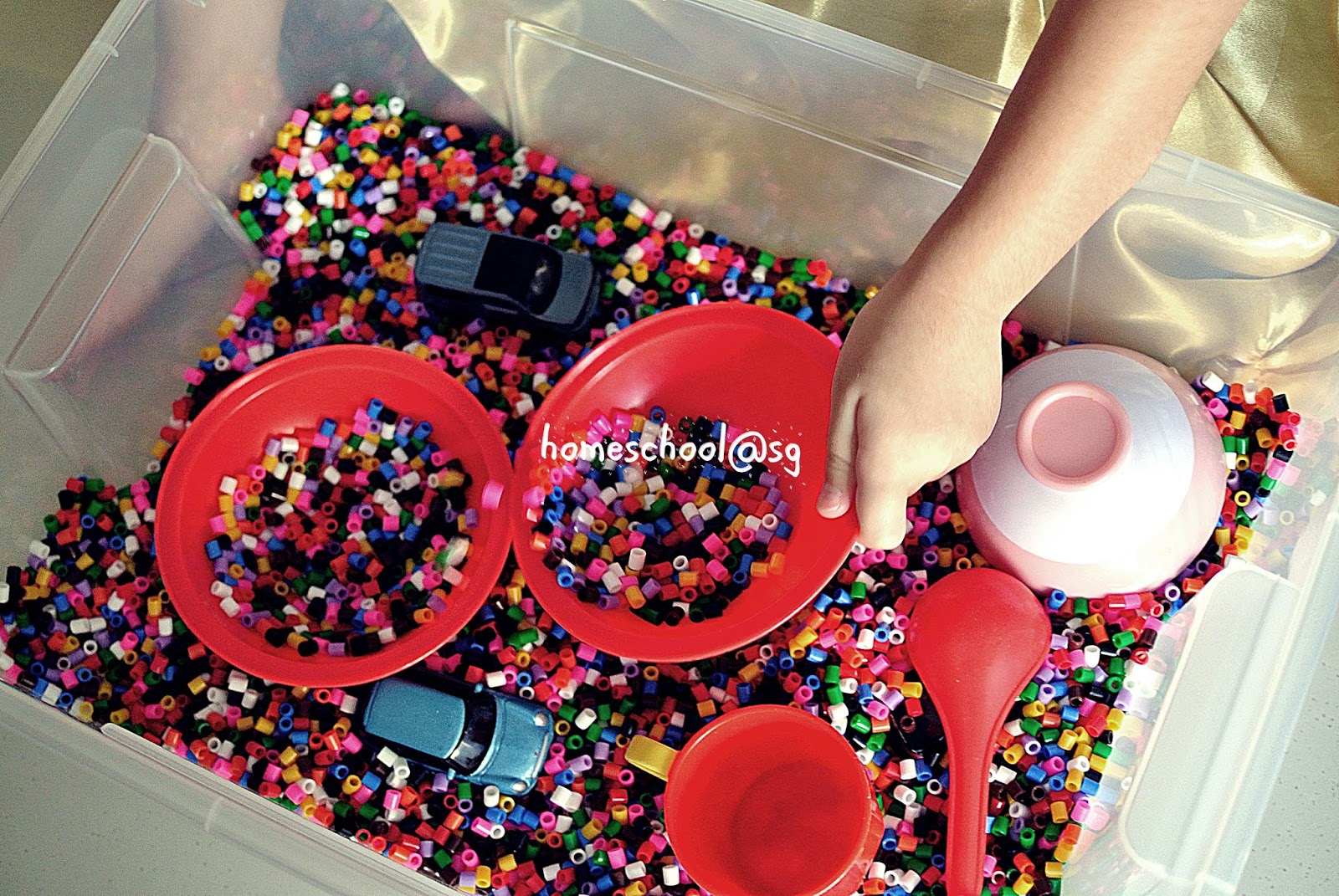 Sensory play with Ikea beads (those type you can form a shape and then iron them on to make them into a coaster)
I was never into sensory boxes although I know of them like 6 years ago! But out of lack of ideas and energy, I decided to whip out one for Doll. I was happy that it entertained her for a long period of time, I was not happy that she insisted I played along with her (I wanted to just fade into the background while she entertains herself). 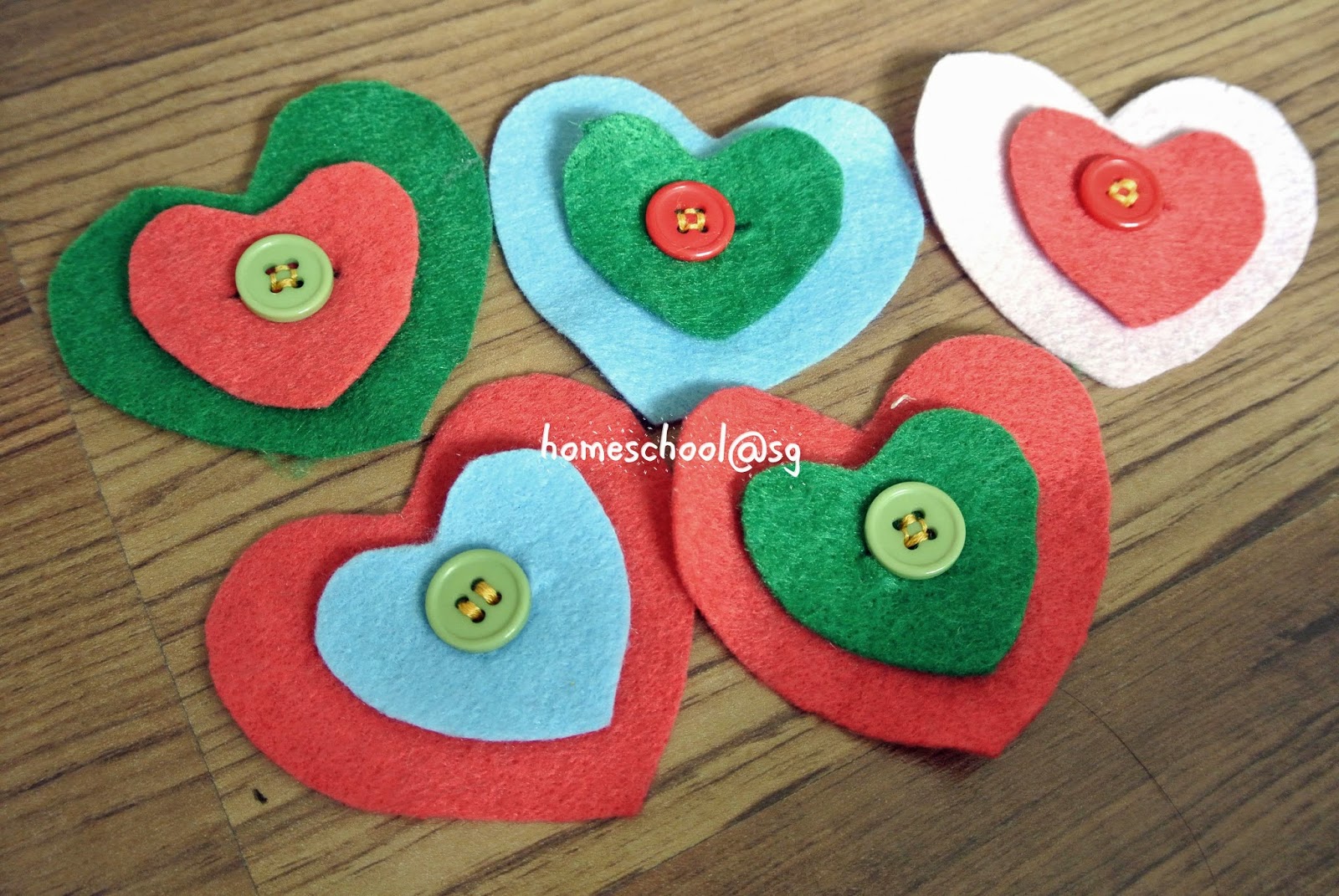 These heart buttons were made when Sonshine was a toddler. I took it out for Doll to practise her buttoning/unbuttoning skills. Actually, it was more to entertain her than anything. She is already buttoning and unbuttoning her pyjamas! 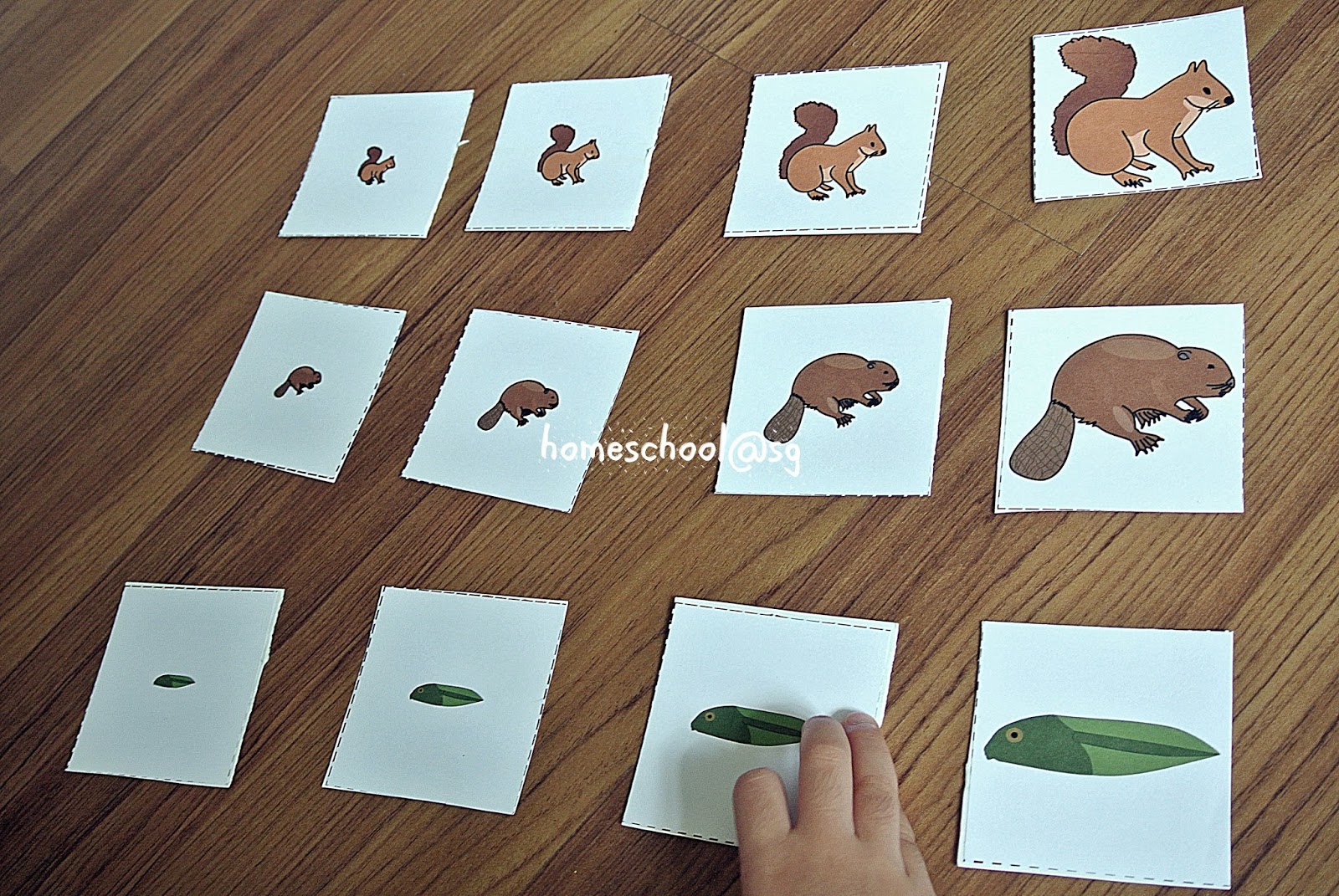 Another material I had stashed in my cupboard! This was printed (sorry forgot the site) long ago for the then toddler Sonshine. It is a simple activity of arranging the pictures from the smallest to the biggest. 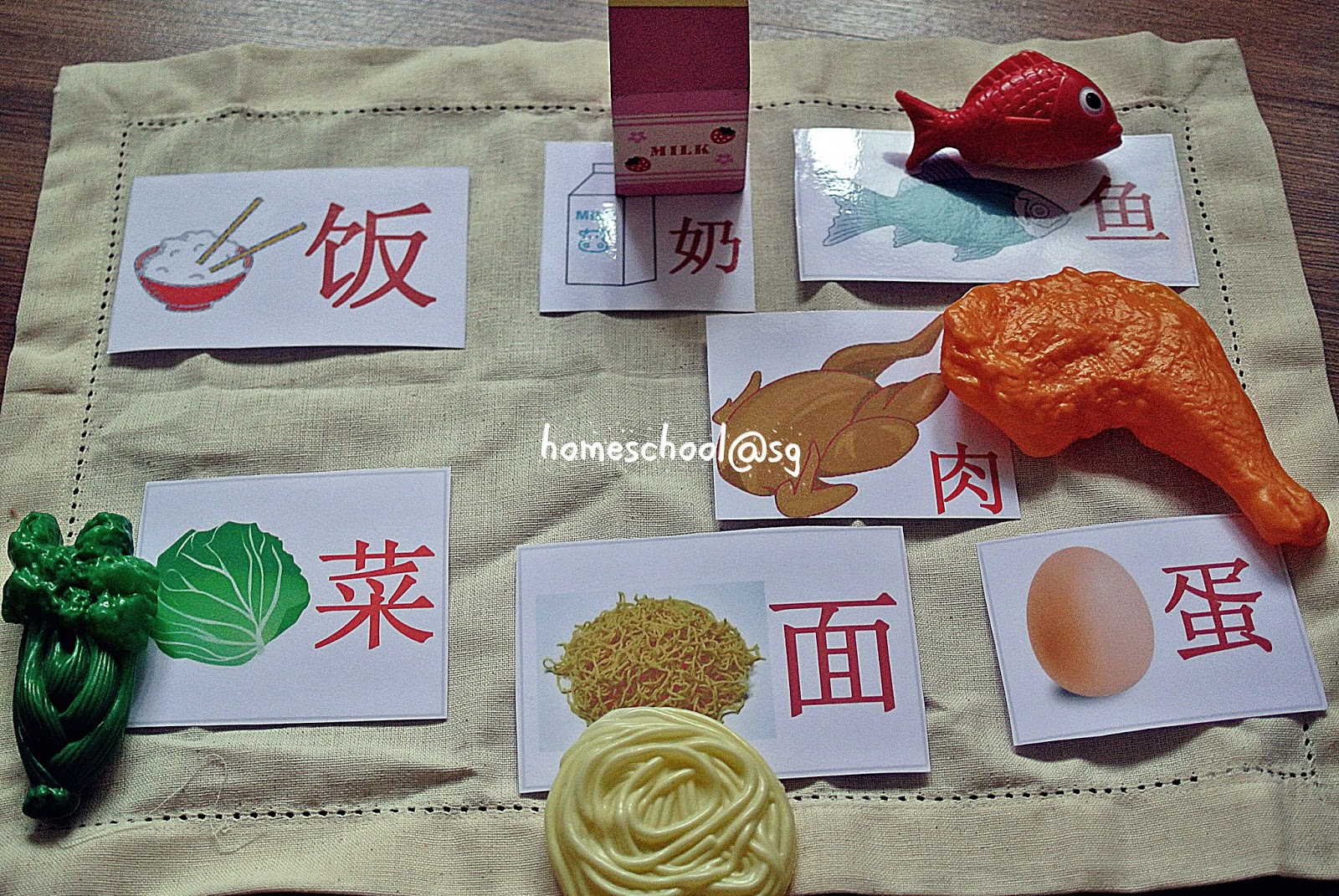 AH! I had wanted to brush up her chinese, she's way under exposed. So I made these cards and have her match her toy food to the cards. 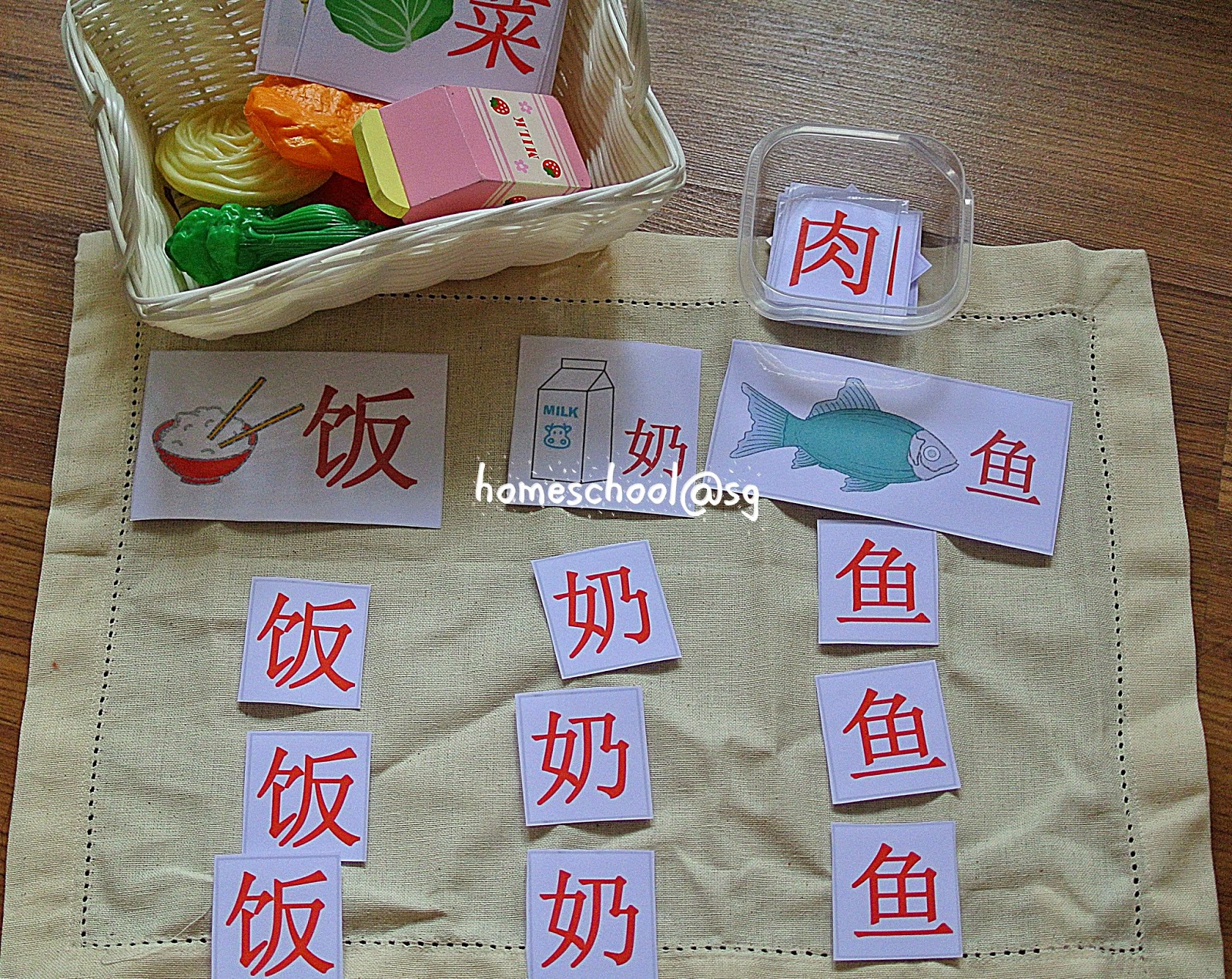 True to my style, I made her match cards. She took a super long time to remember the words and I blame it on the lack of exposure. I don't speak in mandarin to her nor read a lot of mandarin books hence, its a no wonder that she had difficulty remembering the words! But with constant and persistent practise, she finally can read these words! PHEW! As a follow up, I read to her a simple chinese reader that covers most of these words.

Posted by homeschoolsg at 08:25 No comments: Links to this post